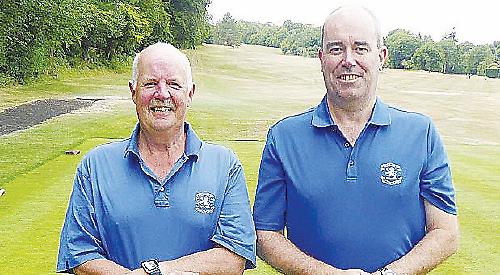 HENLEY Golf Club representatives in this year’s prestigious Daily Mail Foursomes knock-out competition — Richard Fenn and Dave Lawrence — have progressed through to the sixth round.

After winning home matches against Harleyford nd Temple and tight away victories at Caversham Heath and Mapledurham they managed a two and one victory over a strong pairing from Kirtlington (North Oxford) last Sunday.

The duo have been rewarded with a home tie against Donnington Valley (Newbury) in the last 64 of the competition which commenced in March with more than 2,000 clubs entering nationally.

The top 16 qualify for the final at the St Pierre golf resort in Wales in October.

Winner of the main competition was Cliff Edwards who recorded 39 Stableford points to pip Paul Wandless on the countback rule. Ian Brady was third with 38 points on countback from the trio of Ian Heggie, Harry Metcalfe and Steve Webb.

The ladies’ competition was won by Anne Franklin with 37 Stableford points which was three points better than Janet Lawson, Maggi Buffin and Maddy Field. The 19+ competition was won by David Tate with 38 points which was a single point better than Brian Fenwick, Les Franklin and Bill Buffin. The junior prize was picked up by Tobias Pinnington with 40 points in Division 1 beating the club champion Angus Harris-White by three points. Division 2 played over nine holes resulted in a win for William Sadler with 23 points.

The extra medal was won by Ali Mortimore with a score of net 65 which was three shots better than runner-up Brian Shewan.

The ladies held their medal last week in conjunction with the Centenary Trophy which resulted in the trophy being won by Division 4 winner Ann Hollis with a score of net 63. Doreen Longworth was runner-up in this division with a net 68 whilst Jackie Saunders took third spot with a level par net 70.

The top division was won by Sarah Hillas with a score of net 72. Karen Pollard was the runner-up with a net 74 which was a shot better than Maddy Field and Morag Broom.

Division 2 was claimed by Erica Brady with a net 68 which was a shot better than Muriel Quinsac and Gail Henderson. Val Foster took Division 3 with a net 67 on countback from Alison Weir and Ali Mitchell.

The Senior section held the annual running of their Summer Cup competition on Monday which resulted in a win and a two-shot drop in handicap for 19 handicapper John Dowty. Geoff Foster was the runner-up in the competition on countback from Reece Pigden on 40 points whilst David Kirk was a point further back in fourth place.