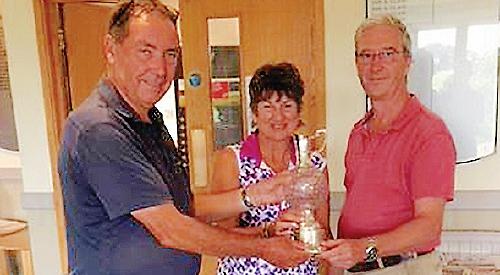 SOPHIE Banham went into the record books after recording the highest ever score by a Caversham Heath lady in the weekend Stableford.

Banham shot 47 points to win Division 3. She went out in 25 points and scored six pars and two birdies — her tally including four four-pointers. Her record-breaking feat also saw her receive a four-shot cut in handicap.

Record-breaker Sophie had something else to celebrate when husband Mark Banham finished as runner-up in Division 1. The divisional honour went to Philip Beresford with 39 points. Banham shot 38 points and third was Kye Machin on countback from Will Tate and Dave Williams, all with 37 points. Banham recorded 11 pars and two birdies and even had a nil return. Machin had nine pars and two birdies, but also grabbed an eagle on the par-five 526-yard 11th hole.

Division 2 winner was Luke O’Brien with 42 points. Runner-up was Christopher Searle, on countback from Gordon Berry, both with 40 points. O’Brien and Searle both received a two-shot cup in handicap while Berry received a one-shot cut.

A score of 50 points from Joyce Collins and Ian Gaff won the Seniors Franklin Cup played off nine-tenth handicap allowance. Runners-up were Daniel Dover and Neil Scott with 48 points. Third were Joe Saunders and Stuart Walker with 47 points.

The ladies’ medal was won by Caroline Dover with net 76. Second was Jane Weller with net 77 and third was Margaret Deighan with net 79.

There was some very good scoring in the Weekend Medal on Sunday.

All the top three in Division 2 received a one-shot cut in handicap. Luke O’Brien topped the list, on countback from Peter Bishop, both with net 70. O’Brien had 11 pars and one birdie while Bishop had eight pars, but ended with a double bogey. Third was Rob Winstanley with net 71.

Glen Dudman received a one-shot cut in handicap after topping Division 3 with net 69. Runner-up was Andy Ward on countback from Samuel Kpani Addy, both with net 73.

There was a father versus son battle in Division 1 of the Midweek medal with father Duncan Peart beating son Callum Peart to top spot. Duncan had nine pars and one birdie in his round of net 67 while son Callum had 11 pars and four birdies in his round of net 68 to pip Neil Scott to runners-up spot on countback. All three players received a one-shot cut in handicap.

Division 2 winner was Simon Dicketts with net 69. Second was Samuel Kpani Addy with net 71 and third was Lynne Rumbold with net 73. Both Dicketts and Kpani Addy received a one-shot cut in handicap.

Joseph Lawrence took the honours in a nine-hole Stableford competition on Friday of last week on countback from Jason Emery, both with 20 points. Third was Kye Machin with 19 points.

Tate finished day one just three shots off the lead after shooting par 72. However, his six over par 78 on day two saw him just miss the cut.

The competition was played over three days with the leading 40 players after two days playing a further 36 holes on day three.