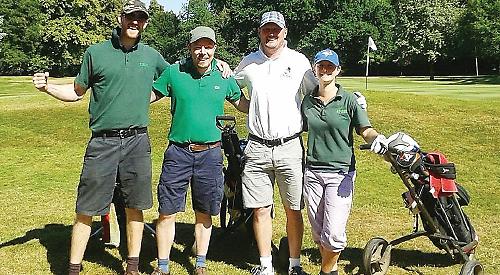 A CHARITY golf day in aid of Camp Mohawk raised about £800.

The eighth annual event was held at Badgemore Park Golf Club in Henley on Friday, June 29, with seven teams of four people competing in a Texas scramble competition to fund-raise for the day centre for children with special needs near Crazies Hill.

The contest was won by a team from Duncan-Lynch Precision Engineering in Wokingham, while the Camp Mohawk team finished last and picked up the wooden spoon.

Prizes were also awarded for longest drive and nearest the pin, which were won by Dan Morgan and Greg Lynch, respectively. After the golf, there was a raffle featuring the star prize of a garden gnome called Gary the Golfing Gnome.

Chris Stillman, chairman of the Friends of Camp Mohawk, said: “It was great to have such a good turnout and so much support from businesses.

“For small charities like ours, with the funding challenges we’re all facing, every penny counts and to make £800 is vital for our ongoing services.”

Next year’s event will be held on the earlier date of Friday, June 14.

Anyone who wants to take part can email Mr Stillman on chris.stillman
@campmohawk.org.uk