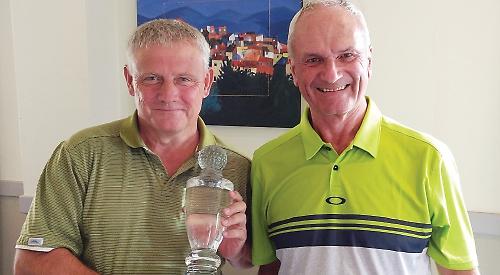 SIMON DICKETTS triumphed in the seniors roll-up to win the Oakley Trophy at Caversham Heath Golf Club despite have a triple bogey on the last hole.

Dicketts shot halves of 21 and 19 points to total 40 points, two more than the chasing group. Mike Day took second place, on countback from Patrick O’Hare and John Purnell, all with 38 points.

Scores were close in both divisions of the midweek Stableford on Wednesday of last week. Jon Winstanley claimed the Division 1 honours with 40 points. Runner-up was Roger Landon on countback from John Purnell, both with 39 points. Winstanley, Landon and Purnell all received a one-shot cut in handicap.

Division 2 winner was Rick Wolski with 41 points. Second was Toby Joyce with 38 and third Stuart Walker with 37 points on countback from Dicketts. Wolski, Joyce and Dicketts all received a one-shot cut in handicap. Daphne Barker won the Ladies’ Stableford on Thursday of last week on countback from Joyce Collins, both with 32 points. Carole Reeves took third place on countback from Sheila Evans, Kathy North and Caroline Dover, all with 30 points.