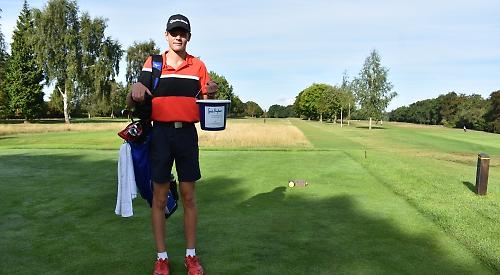 Leo Allen, 15, started at 5.15am and finished about 11 hours later, completing just over five-and-a-half rounds at Henley Golf Club on Friday last week.

Half of the money he raised will go to the Sue Ryder hospice in Nettlebed, which is looking after his grandmother Kathleen Kyriakides, who is being treated for pulmonary fibrosis.

The rest will go towards an expedition to India next summer, which he is doing through Gillotts School where he is a student.

Leo, who has a scholarship at the club, was joined for parts of it by father Tim, grandfather Peter, mother Sophie Kyriakides and her father Costas, who walked alongside him while he played. While on the course Leo collected about £600 in donations while one club member also left a £200 cheque behind the bar.

When he finished the final hole he was cheered into the clubhouse by members and his family.  Leo had expected to finish at about 9pm but played faster than he planned.

“It wasn’t as hard as I thought it was going to be,” he said. “It wasn’t as tiring as I was expecting and was really good fun.”