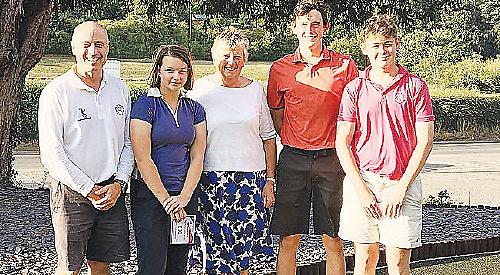 FOR the third year in a row Angus Harris-White won the overall junior championship at Henley Golf Club last week with two fine rounds of 72 gross, both below his handicap of just three over the 36 holes played.

Thomas Hancock had a fine second round of 74 gross, four below his handicap, to win the handicap prize from Harris-White on countback. Archie Fulbrook and Chloe Stanley both beat their handicaps in the second round. Lucy Hucker was the Division 2 club champion.

The annual running of the Reeds Cup was held on Sunday, one of the leading mixed competitions played at the club. Coming out on top in the Stableford foursomes was Anthony Allen and Nikki Donohoe with a score of 40 points which was two shots better than the pairings of Roger Hanner and Pat Melling, Henry and Tracey Ellis and Ann and Ian Thomas.

The seniors captain’s day competition was won by Keith Brockington with a score of 41 points which was two better than runner-up Richard Sessions.

The ladies’ Grandmothers Trophy was played in conjunction with the monthly medal and this resulted in a win for Irene Ferretti in Division 4 along with the trophy with a score of 43 Stableford points. Joyce Arksey was runner-up in this division with a score of 38 which was two points better than Pat Melling, Mary-Jane Crerar and Jackie Saunders. Division 1 was claimed by Sarah Hillas with a score of 37 points which was three better than Maggi Buffin.

The Peter Harrison Trophy saw Les Franklin take the spoils with a score of 39 points which was a single point better than runner-up David Tate. Geoff Varley was third with 37 points, a point better than fourth placed Jerry Luckett.

Division 1 of the Junior Wargrave Cup was won by William Frood with a score of 35 points which was two better than Zander Norris and Allegra Holtom.

Elsewhere Nick Grainger recorded his second hole in one in his life when he sank his tee shot at the 11th hole on Saturday.