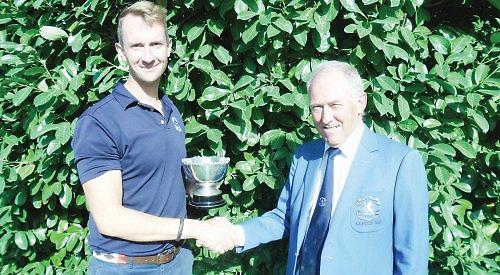 FOR the sixth year running Henley Golf Club have a new firsttime winner of their club championship.

Peter Muhley missed out on the title last year in a play-off but made amends this year when he took the title by a single shot from past winner Henry Bareham.

Muhley is a talented sportsman who won the Wyfold Cup at the Henley Royal Regatta in 2012 whilst with Nottingham Boat Club and is presently head of mathematics at Shiplake College. Following the opening round on Saturday Bareham was the overall leader with 71 which was two shots ahead of Muhley, defending champion Angus Harris- White, Andy Carmichael and Martyn Metcalfe.

However the second round played on Sunday witnessed the best round of the weekend when Muhley produced an outstanding round of 70 which included 5 birdies to claim the championship with a score of 143.

Metcalfe, who won the title in 2016, was third with 148 which was two shots better than Marcel Petrie, Andy Bryan, Brad Young and Harris-White.