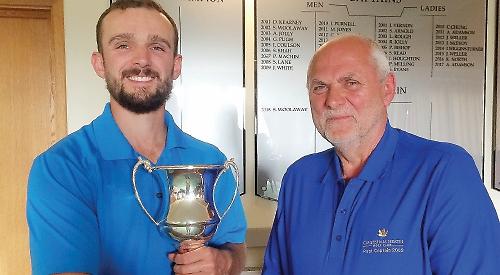 CAVERSHAM HEATH has a new name on each of the three club championship trophies.

Machin was a convincing winner in the men’s championship played last Saturday and Sunday. He shot rounds of 75 and 81 for a combined 156 – three shots clear of nearest rival David Jubb with 159. Third was Michael Beaumont with 164.

Machin’s 75 was the best score on the Saturday, followed by Matt Jones with 78 and James Millard with 79. However, both Jones and Millard faltered on the Sunday with rounds of 87.

Tom Dexter shot the best round on the second day with 79. However, added to a disastrous 94 on day one this only got him 13th place. Michael Deignan followed up his first round 85 with an 80 — the second best score on day two — to take him up to fourth position. Net champion was Jubb with 145 with Andy Lambourne pipping Simon Walker to second spot on countback, both with net 148.

Sophie Banham was the convincing winner in the ladies’ club championship, winning by 12 shots. Banham had rounds of 92 and 90 for a combined 182. Caroline Dover went one place better than last year, finishing as runner-up with 194. Third was last year’s runner-up Lynne Rumbold with 199. The ladies also finished in the same order in the net championship.

Philip Beresford took the seniors’ club championship on countback from Santiago Fernandez Garcia, both with 82. Third was Nigel Smith with 86. Beresford had a birdie and three pars in his last four holes while Fernandez Garcia bogeyed three of his last four. It was heartbreak for Fernandez-Garcia who was runner-up last year and third in both 2016 and 2014. All he received for his efforts this year was a one-shot cut in handicap.