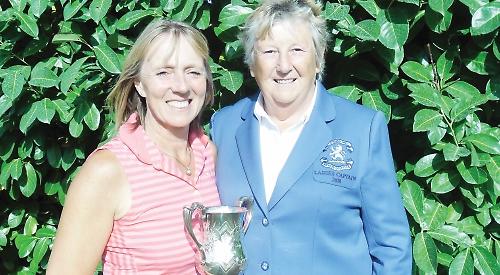 After the Saturday round Dodds held a three-shot lead following her 78 over Pollard while Maddy Field and Morag Broom were a shot back on 83. Pollard wasn’t prepared to give up her title easily and a fine 79 in the second round made life difficult for Dodds who held her nerve and also on to her lead to take the championship with an 82 for a 36-hole aggregate of 160.

Pollard was a shot back in second place with a 161 which was two shots better than Sally Woolven on 163.

The bronze championship was won by Nikki Donohoe with a gross 85 which was seven shots better than Gay Bentley-Coleman and Mary Smith. Josie Heayns was fourth with a 93 which was a shot better than Tracey Ellis.

The silver medal was won by Ngairy Palin with a net 71 which was two shots better than Miriam Dalton and Caroline Archibald.

This year marks 100 years since the ending of the First World War and ‘Thank You’ is aimed at remembering the sacrifices made by all involved in the war effort on behalf of the country and its future generations. In an entertaining day, in which £1,050 was raised, many players donned period dress and there was old style music hall entertainment as well as the Gaffney Land Girls choir.

The Royal British Legion provided a memento token for all taking part in the golf competition as well as medals for the winners.

The competition format for the day was a better ball Stableford with 25 teams of four and a shotgun start. The mixed field played from the ladies’ card with the best two scores to count on par fours and fives and the best three to count on par threes.

The winning team was made up of Norma Thomas, Anne Lloyd, Theresa Dombey and Joy Weatherell posting a score of 103 to be recipients of the ‘Thank You’ medals. Second and third places, decided on countback with both teams scoring 102, were Martyn Walker, Pete Foster, Adrian Cobb and Kevin Hawkins, second, with Terry Killick, Eric Marwood, Gordon Hannam and Owen Saunders in third.

Banham took the honours on countback from David Wise, both with 35 points. Wise missed his chance with a nil return on the front nine. Third was Rob Winstanley with 32 points. Winstanley seemed to be in the driving seat coming to the par three 17th hole, however, he then finished bogey, nil return. Division 2 winner was Mario Atkinson with 40 points. Andy Horn was runner-up with 39 points and third was Stephen Halford with 38. Both Horn and Halford had a nil return on their scorecard while Atkinson and Halford received a one-shot cut in handicap.

Geoff Parlour topped Division 3 with 36 points, ahead of Dan Rawlings with 35 and Richard Usher with 34.

Patrick O’Hare and Joe Saunders are the new holders of the John Pitts Pairs matchplay knockout trophy after defeating Sunil Shah and Jim Willison in the final. Kathy North beat Jane Weller in the final to win the Ladies’ V&A Vase.