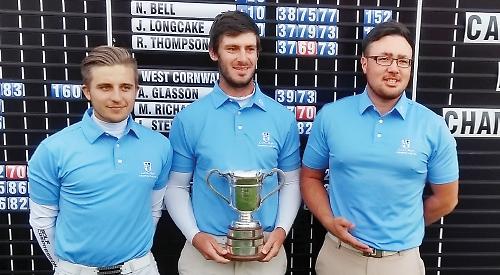 A TRIO from Castle Royle Golf Club are heading to Europe after winning the English Champion Club tournament at Huddersfield in Yorkshire.

David Langley, Harrison Arnold and Tim Shin won the title by eight shots after the 36-hole strokeplay competition, with all three scores counting in both rounds.

They finished on six over for a comfortable win against last year’s champions, City of Newcastle Golf Club.

The victory means that the Castle Royle team will represent England in the European Men’s Club Trophy next month at the Golf du Médoc resort in France.

Speaking after the win, Langley, who recently helped England win the men’s home internationals, said: “We knew we had a strong team and that we had a good chance.

“We are all good friends, so were motivated to play well for each other and the club.”

The trio got off to a quick start with a team total of two under par for the first round, which gave them a one-shot lead over Cosby Golf Club, Leicestershire and Rutland. The second round was played in difficult, blustery conditions but Castle Royle dug in with a combined score of eight over.

Coming out on top were Dave Crooks and Paul Sherwood. In a close finish they recorded 39 Stableford points to win on countback from the pairings of Derek Brown and Fred Maroudas and Peter Craig and Matthew Gladdish. The pairing of Bill Buffin and Sandy Terris were fourth with 38 points. Mike Walker recorded a hole in one on the 13th hole during the competition.

The extra medal was won by Angus Harris-White with a net 70 which was one shot better than his playing partner Tom Hancock. Alan Wilson was third with a net 73.

The ladies’ section held the qualifying ladies’ Stableford in conjunction with the David Stevens Trophy which resulted in a win for Maddy Field in the top division with a score of 35 points which was two points better than Morag Broom. Sally Woolven was third with 32 points.

Sharon Chamberlain won the David Stevens Trophy along with Division 2 with a great score of 41 points which was four points better than Elma Munro and Sandie Howell. Valeska Maclachlan was fourth in this division with a level par 36 points.

Another good score of 40 points saw Gay Bentley-Coleman taking Division 3 which was six better than Delia Norris and Caroline Thomas whilst Mary Wingrove claimed Division 4 with 36 points which was a point better than Anne Richards.

It was the fourth time she has won this trophy, having won it in 2013 and 2014. Cannon herself is also a previous winner, taking the honours in 2015.

The match was a tight affair played in blustery conditions, with Cannon two ahead at the halfway mark. However, Weller had drawn level by the 15th hole and then won both the 16th and 17th holes to clinch victory.

Meanwhile Tony Cole is the new holder of the Rod Starling Trophy Stableford competition which was held on Monday. The 29 handicap player recorded 37 points to take the trophy by one point. Mark Raymond was runner-up, on countback from Merv Jones, both with 36 points.