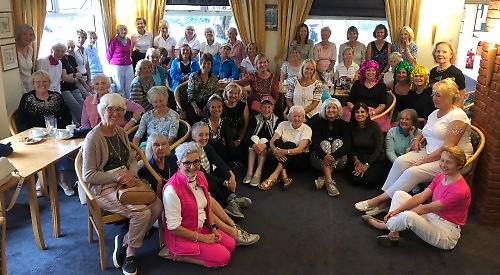 LADIES’ captain Gill Mitchell held her captain’s day last week at Henley where good scoring was the theme of the day.

The pairing of Anne Franklin and Lynn Dalglish took the top spot in the 4bbb competition with 44 points. Morag Broom and partner Ngairey Palin were runners-up with 40 points which was a single point better than the pairing of Rachel Hall and Sandie Howell. Hiver Pruden and Cindy Weight took fourth place with 38 points on countback from Gail Henderson and Janet King.

On the day the ladies collected £260 which was donated to the captain’s charity, cancer research.

The competition for the Garnham Cup also took place on Saturday, the premier fourball better ball men’s competition which resulted with some high scoring.

Coming out on top were the pairing of Matthew Davis and Richard Bull with a great score of 46 points to take the cup by one point from the father and son team of Martin and Max Gosby.

Three pairings also had good rounds recording a score of 44 points however mens captain Dave Griffin and his partner Alan Wilson pipped the pairings of Dave Crooks and Colin Grimmett and Ian Heggie and Henry Bareham on the countback rule.