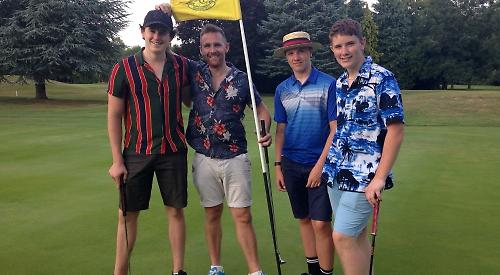 FOUR golfers braved the rain at 5am on Thursday of last week to tackle the first of four rounds of golf at Badgemore Park Golf Club.

Their quest was to successfully complete the 72 holes on foot and carrying their clubs as they raised £565 for the Macmillan Cancer Support charity.

The idea was proposed by Matt Eggleton, who works at the golf club but who is a relative newcomer to golf, having only started playing two years ago.

Eggleton was joined by 18-year-old Angus Harris-White and brothers Owen (17) and Oli Saunders (15).

Their brightly coloured shirts contrasted starkly with the downpour and the sodden greens that greeted them for the first two rounds but the sun was shining brightly when they completed the challenge 14 hours later.

According to Matt, the worst part was putting through puddles! They all agreed that the best part was that they have already raised £565 for Macmillan Cancer Support. If you would like to help these young golfers to increase this total, please contribute via the following link