Wootton leads side to pro-am success 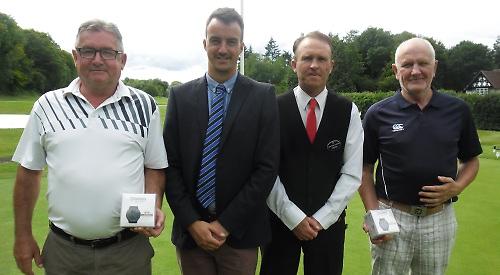 HENLEY held their 40th annual pro-am on Sunday in sublime conditions which contributed to good scoring.

The professional prize went to Guy Woodman of ProAgenda.com with a score of 66 which was two shots better than Dan Scourfield of The Wiltshire Golf Club. Alex Lodge was third with 69.

The team prize was won by the quartet of Andy Talty, Darren Bartlett, Stuart Symonds and professional Adam Wootton from the Oxford Golf Centre with a score of 15 under on countback from the team of ladies champion Clare Dodds, Ann Hollis, Anne Franklin and professional Martin Morbey.

The ladies’ section ran their monthly medal in conjunction with the Centenary Trophy resulting in a win for Maggi Buffin in the top division with a net 68. Sally Woolven was runner-up on countback from Clare Dodds when both players recorded net 70 which was a single shot better than fourth placed Janet Lawson.

Gay Bentley-Coleman claimed Division 2, again on countback from Ngairy Palin with net 72s which was a shot better than Nikki Donohoe in third spot. Mary Smith recorded a great score of net 65, to take Division 3 along with the Centenary Trophy, which was 5 shots better than runner up