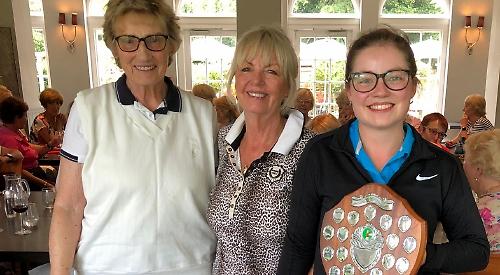 The ladies’ champion competition was competed for over two days with 18 holes being played on both occasions. Anderson took the honours with a gross score of 147.

Meanwhile Alison Wood took the honours in the Lyndon Trophy a net score of 143 points. On Sunday the club held the annual McGrae Cup which was competed for by 30 players. Derek Brown, Gordon Hannam and John McConnell were the outright winning team with 83 points with Terry Killick, Steve Clark and Ashley Davies second with 79 points. The photograph shows the winning team being presented with the cup from left to right, Gordon Hannam, club captain John Urban, Derek Brown and John McConnell.