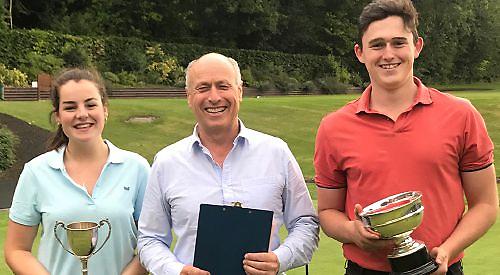 Promising junior Mairi Weir recorded a score of 155 to take third place. Weir took some comfort from the fact that she took the handicap prize with a net score of 132. Allen was second with 135 which was three shots better than Harris-White.

Bill Buffin won the Peter Harrison Trophy, named after the golf club stalwart who passed away in 2007, with a score of 40 Stableford points. Fred Maroudas was runner-up with 39 points on countback from Simon Ferretti and Eric Sykes.

The ladies section held the annual running of the Grandmother’s Trophy in conjunction with a Stableford competition which was won by Jan King with a score of 38 Stableford points on countback from Delia Hudek. Sheila Needham took third spot, again on countback with 37 points from Erica Brady, Joyce Arksey and Cindy Weight.

The annual running of the Reeds Cup, a mixed foursomes competition, took place on Sunday resulting in a win for Henley goldsmith Simon Lawson and his wife Janet with a score of 38 Stableford points. Erica and Ian Brady were runners-up with 36 points which was a point better than the pairings of Maggi and Bill Buffin, Gay Bentley-Coleman and Jonathan Coleman, Carol and Eric Willson and Irene and Peter Ferretti.

The extra medal was won by John Bates with a net 70 on countback from Nigel Hawkins and Len Leigh.