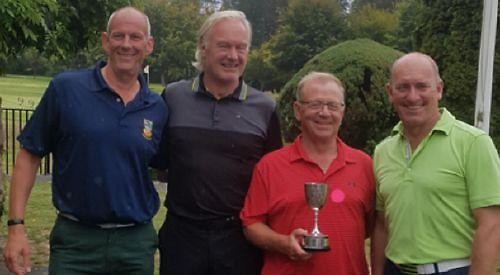 This quirky competition, devised by past captain Danny Fois, has pairs playing a combination of greensomes, foursomes and better ball, split first three, second three and last three holes, front and back, respectively.

Twenty-four pairs took to the course and Foster and Cobb took top spot after carding 43 points.

Badgemore’s vice-captain, John Grace, and his partner Keith Cheese carded 42 points to be pushed out to third place on count back by second-placed Peter and Pauline Bishop. Fois picked up the wooden spoon with he and his partner struggling to score well throughout the day.

The following day the club hosted its annual men’s invitation event, which attracted 20 pairs to compete for the Tim Bigley Trophy.

Nearest the pin prizes went to Darren White, Wayne Porter and Derek Brown and the final standings had Kevin Grant and Wayne Porter in third place behind Ted Rooke and Martyn Walker with Gordon Hannam and Richard Coghlan lifting the trophy.