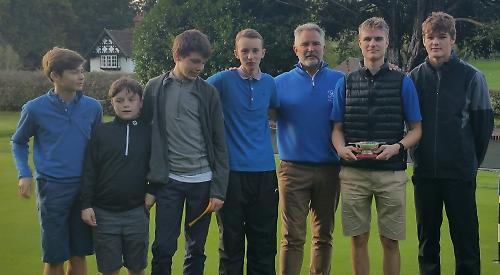 Allen and Frood triumphed with a score of 43 Stableford points with Edward Pratt and James Sampson runners up with 36 points which was seven better than the third place pairing of Jake Hele and Tobias Pinnington.

The mixed winter series Stableford was won by Hamish Peters with 39 points which was one better than runner up Keith Hillas. Gay Bentley-Coleman and Phil Wood were a further point back in third and fourth place respectively.

The “last medal of the year” took place and in this competition five handicapper Andy Bryan was successful with a score of net 69 which was a shot better than runner up Andy Williams.

The seniors memorial trophy was won by Dave Crooks with a score of 38 Stableford points on countback from Chris Pyatt whilst Simon Ferretti won the 19 plus competition with 43 points.

Sally Woolven took Division 1 of the Ladies’ Cup first round with 29 points which was one point better than Sarah Hillas. Erica Brady claimed Division 2 with 28 points from runner-up Nikki Donohoe who recorded 26 points whilst Anne Franklin took Division 3 with 31 points. Caroline Thomas was runner up in this division with 26 points.

Jackie Saunders won Division 4 with 27 points with Irene Ferretti runner-up with 25 points. Gail Henderson won the 15 hole Stableford with 26 points from runner-up Alyson McGough who was two points behind.