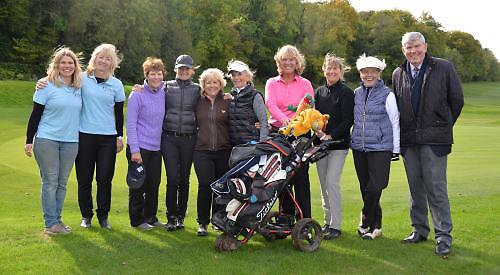 MORE than £2,500 was raised at the 10th annual golf day in aid of the Chiltern Centre in Henley.

A total of 58 players took part in the Stableford-style competition at Henley Golf Club, where the aim was to have the highest score rather than the lowest.

The golf was followed by a two-course lunch, raffle and live auction, which was conducted by Doug Ash, a trustee of the centre.

Prizes were donated by the Hart Street Tavern, which has chosen the Chiltern Centre as its charity of the year, hair salon La Medusa hair salon and Temple Golf Club in Hurley.

The golf day has now raised £35,000 in 10 years for the charity, which provides care for young adults with learning or physical disabilities.

Paul Barrett, who chairs the trustees, said: “We have lots of supporters who come back every year and it is always a lovely day. Everybody enjoys it whatever the weather. All the support is hugely appreciated.”

Certificates of recognition were presented to people who have taken part every year and Mr Barrett’s wife, Mary, received one for selling raffle tickets.