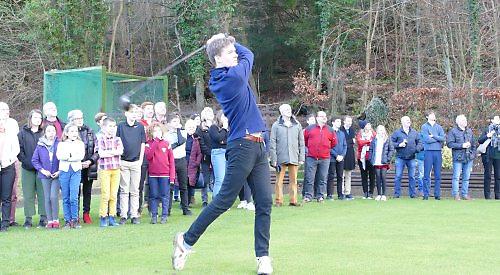 THE final event of the junior season at Henley Golf Club was held on the Monday before Christmas.

After a prolonged wet spell the sky cleared for the drive-in of the 2020 junior captain Will Frood. Leo Allen was announced as his vice-captain.

Before the drive-in the final competition of the year, the Kathy Sparks Trophies was played for by 30 golfers. The competition was played in four categories based on age and handicap level.

The main 18 hole Kathy Sparks competition for lower handicap boys and girls was won by Leo Allen with 38 points playing below his handicap of eight. Second place went to incoming captain Frood.

The Young Sparks, also 18 holes for handicaps up to 36, was won by James Sampson with 37 points from Olivia Young.

The Junior Sparks nine hole competition for handicaps up to 54 was won by William Sadler from Monty Smith.

The younger players had group tuition from the PGA coaches and then a team competition on the course which was won by Ralph Surplice, Gabriel Surplice, Bertie Speirs, Luke Taylor and Angus Smith. In the afternoon parents and sponsors assembled for the presentation of prizes for the 21 club competitions played for in 2019.

Reviewing the season Mark Howell, head professional and junior organiser, reported that almost 100 children were now playing at Henley making it by far the largest junior section in the area.

The results of the season long order of merit based on aggregate results from all the season’s competitions were announced. The girls’ winner was Lucy Hucker from Mairi Weir. The Division 2 boys’ winner was Max Cranstoun from William Sadler. The boys’ Division 1 winner was Zander Norris from Toby Pinnington and James Sampson.

Annual scholarship performance awards for 2019 came next for the children awarded the different levels of the 40 on offer. Best performances for the most improved scholarship children went to Frances Sadler for minis, William Sadler for cadets, James Sampson for teaching and Zander Norris for playing scholarships.

Finally the committee’s player of the year award was presented to Olivia Steel for her support to league teams and club events.