Guard of honour for new captain 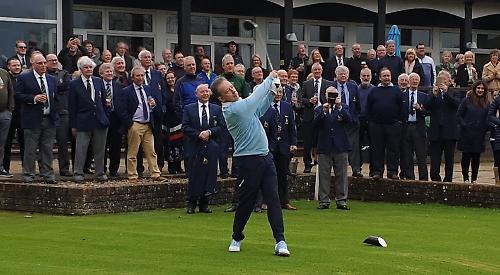 THE new captain of Emmer Green-based Reading Golf Club launched his year in charge with a drive-in.

John Rusby teed off to the delight of more than 200 club members, family, friends and guests last Sunday.

Rusby’s entrance onto the tee was heralded by a guard of honour made up of 20 juniors. The juniors’ captain Lewis Thomas led the way, carrying the captain’s driver.

In traditional style, marker sticks were sold to members in support of the captain’s charity, the Golf Foundation, which raised in excess of £500.

The choice of charity for this year was inspired by the recent growth of the juniors’ section at the club. The charity’s aim is to change the lives of young people, irrespective of background, ability or disability through their introduction to golf.

After being welcomed on to the tee by head professional, Joe Templer, Rusby‘s drive was met with a loud cheer. He was then presented with his club captain’s jacket and tie by 2019 captain David Brown and greeted by many past captains, all resplendent in their club jackets.

The morning shotgun competition, with 88 competitors, was won by Roger Beavis, Peter Lowden, David Morley and Sam Wakefield with 93 points. vice-captain Ian Wallace presented the prizes to the winners.