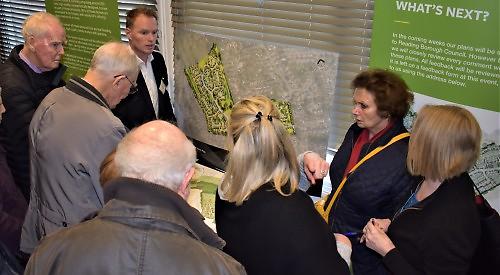 PLANS to build about 250 new homes on the outskirts of Emmer Green have been shown in public for the first time.

More than 400 people attended an exhibition at Reading Golf Club, off Kidmore End Road, where club officials and developer Redrow Homes set up display boards and invited comments from the public.

Redrow plans to build on a 30-acre plot at the site’s south-eastern corner, near the main entrance and clubhouse, after the club moves to a new home at Caversham Heath Golf Club in March next year.

It will submit a planning application to Reading Borough Council later this year.

More than three-quarters of the new units would be houses and more than 60 per cent would have three or more bedrooms. Some would be “affordable” with rents or sale prices below market rates.

The development site comprises all the club’s land within Reading borough, of which about nine acres are earmarked for up to 130 new homes under the borough council’s local plan.

The plan also calls for the golf club to remain and build a new clubhouse.

The club’s remaining 66 acres, which run as far north as Tanners Lane and as far west as the footpath off Gravel Hill, are in South Oxfordshire and aren’t earmarked for housing. Instead they could be opened to the public with new facilities such as a community orchard, allotments, an accessible play area, multi-use sports pitch and wooded areas with at least 1,000 new trees.

The developer, which will buy only the land in Reading after the move, has promised to build a new health centre and says it is in talks with neighbouring GP surgeries and NHS commissioners about the best location.

It says this would be accessible by bus as local routes would be diverted to serve the new estate and part of the facility would be set aside as a community space or café.

The club decided to relocate in 2017, saying it was at risk of insolvency due to declining membership and rising maintenance costs. It said it couldn’t develop new facilities to attract more members because it is next to a residential area.

It says the housing scheme is a “compromise” that will protect the site from falling derelict and will open a large amount of green space to the public for the first time. Visitors who spoke to the Henley Standard at the exhibition criticised the scheme.

Wayne Courtnage, of Soane End, said: “It’s not an unsightly concept and they’ve clearly put thought into it but we’re a bit disappointed that there’s no provision for a school and there doesn’t seem to be much greenery for the children.

“When they built housing off Bugs Bottom in the Nineties we were promised a school there but it never happened and we need another because the local secondaries are short of places.”

Stuart Hylton, of Kidmore End Road, said: “They’re talking about improvements on the site but there’s a wider strategic issue with the increase in traffic, which already gets snarled up going south into Caversham and Reading centre.

“A third bridge over the Thames might help but that’s been on the table since the Twenties and won’t progress while South Oxfordshire District Council still has breath.

“Reading has sorted out its housing requirements until past 2030 and doesn’t need any more.”

Ruth Brooks, of Brooklyn Drive, said: “Kidmore End Road is almost a one-way street with all the parking down one side and to solve that you’d need to narrow the verge, which is already dangerous for children going to school and would get worse.”

Her husband Michael added: “The borough council’s position is to mostly develop south of the river plus there’s a national drive to build on brownfield land. The council has declared a climate emergency so we shouldn’t be building on green spaces.”

Mike Muston, of Chalkhouse Green, said: “I’m worried about the possible spread of development into South Oxfordshire. They talk about preserving green space but I used to work in property so I know how developers operate.”

Barbara Pigot, of Crawshay Drive, said: “Air pollution is already a serious issue and this will make it worse by putting hundreds of extra cars on the roads. It’s difficult enough getting into town as it is — this is the wrong location.”

Gary Stangoe, manager of the club, said: “We’ve been on the land for more than 100 years so we’re well aware of our responsibilities to the community, which is why, among other things, we want to open it up to the public and improve it.

“We’re not property developers and, despite some people’s claims, we’re not acting out of greed or trying to build as many houses as possible.

“We’ve done our best to develop a considered approach which allows the club to survive and grow while leaving a sustainable legacy to be proud of.”

The club says moving to Caversham Heath will allow it to become a “top 100” course attracting players from around Britain and overseas.