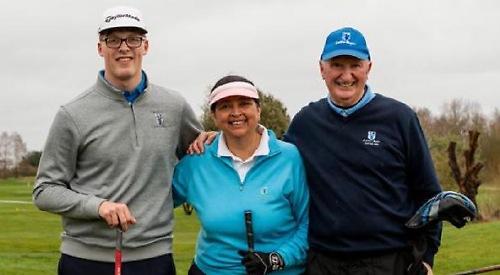 CASTLE ROYLE celebrated the official start to the club’s 26th year on Saturday in cold and damp conditions.

With the weather delivering all four seasons, including hail and snow, in only a few hours this year’s captain Andy McLean, lady captain Sonya Singh and junior captain John Wellman drove in in front of a large crowd of supportive members who then participated in a fun shotgun start competition.

At the prizegiving, outgoing captains Peter Condon and Julie Metelko announced that they had raised £21,585 during their year for the local charity Alzheimer’s Dementia Support. John McFarlane from the charity received the cheque with gratitude and members applauded loudly when the new captains revealed that they have decided to support the same cause for the third year in a row.

Last year was a hugely successful one for the club with Cara Gainer and David Langley representing England on a number of occasions.