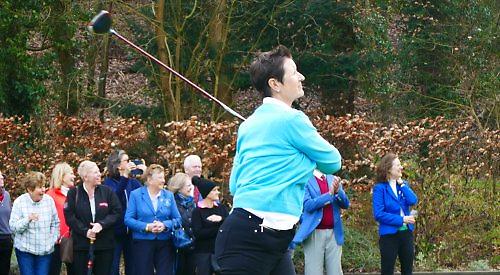 A bumper crowd including past men’s and ladies’ captains, newly-elected president Dave Sexon and club members and staff joined Gay Bentley-Coleman for her inaugural drive-in.

Gay, 62, from Hambleden is the first ladies’ captain at Henley who is a graduate of the club’s successful golf academy programme run by professional Mark Howell every year for beginners and men and women who are returning to golf.

Bentley-Coleman said: “I follow in the footsteps of many great ladies at Henley and I am very honoured to be taking up this important role.

“The excellent experience I had in the weekly academy classes, the wonderful teaching available at Henley and the friendliness of all the members has led me to where I stand today.”

Earlier in the day 60 ladies took part in a Texas Scramble team competition which was won by the new ladies’ captain, past captain Gill Mitchell and club chairman Rachel Hall.

In second place were Sally Birkett, Morag Broom and Jacqueline McCourt and in third place were Caroline Archibald, Sandie Howell and Valeska Maclachlan.

A customary competition in aid of charity to guess the distance of the new captain’s inaugural drive using pegs placed on the fairway was won by former ladies’ captain Sally Woolven.