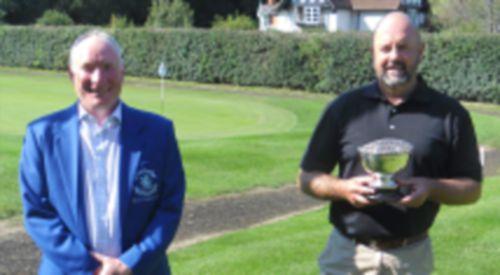 After the first round, Zac Jones was the leader with a score of one over par (71) which was two shots better than Martyn Metcalfe with Bareham and Andy Carmichael one shot further back.

The second round started with the leader recording a double bogey on the opening hole as he did the first round which immediately gave Metcalfe a share of the lead.

Metcalfe then double bogied the second hole and with Jones recording a birdie suddenly a three shot lead emerged for the overnight leader.

The final three ball saw the lead constantly changing and Bareham quietly crept into the equation with birdies on the fifth, 12th, 15th and 18th holes to record the best score of 72 to claim the championship by two shots from Jones. The 2017 champion Angus Harris-White was third with a score of +10.

Bareham was the winner of the championship in 1988 and 1989 before leaving the club to become the professional at Collingtree Park Golf Club in Northampton.