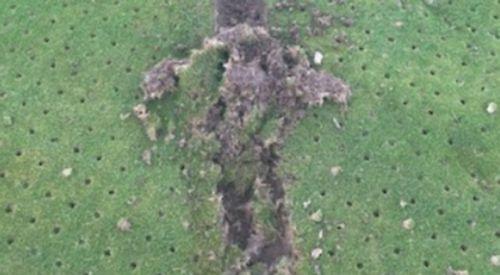 VANDALS damaged a golf course by deliberately driving across it on motorbikes.

The incident happened at Henley Golf Club on Saturday afternoon.

The course is currently closed because of the coronavirus pandemic but is still used by walkers for exercise.

Dozens of walkers watched as a blue quad bike and two orange motorcross bikes were driven over fairways and greens.

One person was assaulted when they confronted the vandals.

The drivers, who were wearing helmets and dark overalls which obscured their identity, caused what the club called “significant damage”.

The worst damage was on the 16th green where the bikers revved the engines and tore up two large chunks of turf.

The bikers sped off towards the clubhouse and then exited the club and on to Harpsden Road.

They were filmed by a member of the club and the images were posted on social media to try to help identify the culprits.

James Brockington, the club’s general manager, was at home when he received a phone call to tell him what had happened.

He said: “As far as I know they entered the club up the stairway by the clubhouse and tore up a few of the greens.

“The 16th green is the worst where someone has revved the engine and torn up two chunks but that has now been repaired.

“There are tyre marks all over but the grass will grow back so at least the damage is repairable. It is just frustrating that this has happened.” He said the ground staff had been carrying out spring maintenance work on the greens last week in preparation for when the club can re-open.

Mr Brockington said: “For members the vandalism is even more galling because they can’t get on the course due to the coronavirus restrictions and some can’t come here because they live too far away to come for their exercise.” He said the course had been very busy with walkers during the lockdown, adding: “We have a number of footpaths across the course and although it is private land, we haven’t stopped people coming here with their dogs.”

Thames Valley Police said the bikers had travelled from Britwell Salome, down to Ewelme and into South Stoke, the Henley area and Ipsden before disappearing.

They issued an appeal on social media and dozens of people reported making sightings, including some in Sonning Common and Checkendon.

One parent said that their children were almost run over by the bikers while they were out on a walk while several others complained about the noise as they revved the engines.

Mr Brockington said he had heard the bikers caused a nuisance in and around neighbouring villages.

“They were scaring people by driving down bridleways and footpaths,” he said. “It seems they kne what they were doing.”

If you witnessed the incident or have any information that might help identify the bikers, call Thames Valley Police on 101, quoting reference number
INC-20210220-1622.