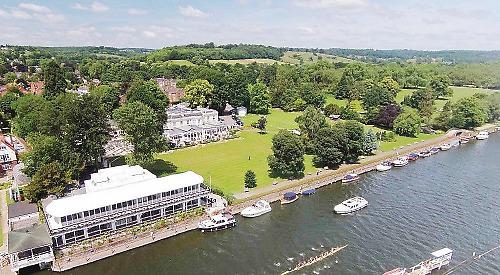 PLANS by a private club in Henley to share its facilities with golfers have been scrapped after a revolt by members.

Phyllis Court Club, off Marlow Road, had entered a “reciprocal arrangement” with Henley Golf Club in Harpsden so they could both increase their offerings in a bid to attract new members.

Officials said the partnership had been made possible because the clubs “share the same ethos”.

But a week after both clubs issued “clarifications” about the deal to their members in the wake of criticism, the scheme was scrapped.

He said many members had complained to him personally as well as to Chris Hogan, the club’s chief executive and secretary, and its council members.

Mr Ainsley said: “While there were benefits to this arrangement on both sides, the overwhelming reaction by members was negative.

“As a consequence of the strength of these feelings, the council has unanimously agreed to end this relationship with immediate effect.”

Under the terms of the deal, all Phyllis Court Club members with an established golf handicap could play up to six rounds a year at the golf club at a concessionary rate.

They could also take guests to play the same number of times but at a slightly higher rate.

Members could also join the golf club’s academy for beginners.

There were also plans for hotel guests to be offered a “stay and play” package.

The course manager at the golf club was also going to be made available to advise Phyllis Court Club on maintenance of its grounds, especially its croquet lawns.

In return, about 450 voting members of the golf club were to be eligible for “reciprocal benefits”.

They could visit Phyllis Court Club up to twice a month and take a guest six times a year.

They were also entitled to reciprocal rates on bedrooms, room hire and private events as well as benefits offered for Henley Royal Regatta and the Henley Festival.

The golfers could also have use of the tennis courts at Phyllis Court Club at certain times. The agreement did not allow attendance at “normal” club events, membership of interest groups or use of the fitness centre, croquet lawns or club boats and moorings.

Members at Phyllis Court were worried about the effect on the club’s “ambience”.

Before the agreement was scrapped, the club said: “Henley Golf Club is a private members’ club with rules, bylaws and a dress code.

“It was founded in 1907, one year after our club, and their members and directors share the same ethos as Phyllis Court.

“As a club, we at Phyllis Court offer far more than most exclusive country clubs in the UK. What we do not offer is golf, one of the most popular pastimes and particularly so for the club’s demographic.

“Many members have expressed an interest in golf and prospective members often ask what facilities we have.

“A significant number of our competitor clubs offer golf facilities. By our reciprocal partnership we will now add golf to the benefits of membership here, attracting new members and retaining members with an interest in the sport.

“Phyllis Court members will enjoy the same privileges as social members at Henley Golf Club with no limit of access to the clubhouse and use of all practice facilities, including the driving range, chipping green and putting green.

“The impact on the general ambience at Phyllis Court is expected to be negligible but, as with all reciprocal agreements, the benefits will be monitored by the membership committee and changes made as required.”

The club, which has reciprocal clubs in the UK and around the world, said the partnership with the golf club would mean Phyllis Court would “benefit from increased revenues and potentially new members”.

James Brockington, general manager of Henley Golf Club, said: “The board sees this reciprocal arrangement between the two clubs as a benefit to all voting members.

“It has the potential to generate revenue for the club and at the same time give you access to a first-class facility on the river.

“The agreement will be monitored by the board and changes made as required.”

Following the scrapping of the deal, Mr Brockington did not wish to comment.