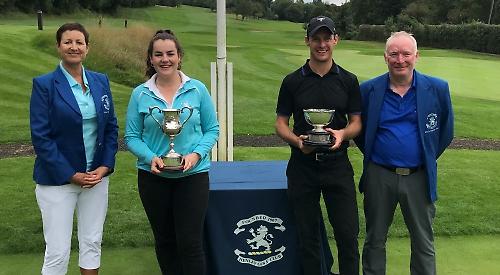 ANDREW BRYAN and Mairi Weir have been crowned men’s and women’s champions at Henley Golf Club.

In the men’s event Bryan and last year’s winner Henry Bareham carded rounds of 70 to share the lead after day one with a slender advantage over a host of players all within three shots.

After 36 holes Bryan and Bareham were still tied with a total score of 143 and they headed to a playoff.

Martyn Metcalfe and Zac Jones both narrowly missed out on the playoff and finished tied for third on a total of 144.

There was a three-hole play-off to decide the champion, and this failed to provide the winner so the competition went to sudden death. On the fourth extra hole Bryan made a four to Bareham’s five to claim the title for the first time.

The ladies championship also went down to the wire after Weir had led by three shots following the first round.

Weir carded a second round 81 to finish on 159 which secured her first title by one shot from Clare Dodds and Sally Woolven who both had fantastic rounds to finish on 160. Sarah Hillas finished in fourth place on 161.

Maddy Field won the handicap trophy with a total net score of 142 over the two rounds.