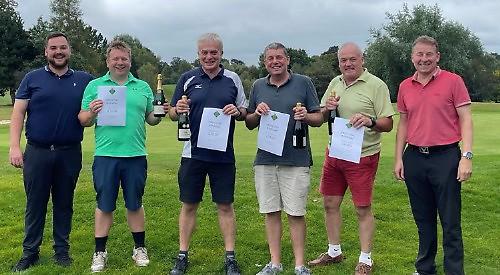 ON a day of low scoring, Michael Evans claimed victory in last weekend’s Pedlar Cup held at Henley Golf Club with a score of net 63. Michael Prince finished second with nett 65 and the in-form Andy Fairhall third with net 67.

Ian Piggott won the seniors autumn salver with a score of 42 Stableford points which was a point better than James Parfett. Kelvin Logan finished third on countback with 39 points edging out Steve Swiatek into fourth. Meanwhile, at Hennerton Golf Club, the team of Bob Norris, Craig Wright, Andy Sale and Gordon Manning ran out winners in Texas Scramble on Saturday.

The competition, which attracted 72 players in teams of four, was played with the new world handicap system and this returned some good scores.

The winning four carded a net 44.1 from a gross score of 59. The second-place team of Nigel Shaw, Chris Pitfield, Chris Allchorne and Val Doyle carded a net 45.0 (gross 59).

Third place went to Steve Harris, Lin Harris, Ron Martin, and Steve Baker who had a net score of 46.1 (gross 63) whilst Allan Dishington, Chris Dishington, Colin Quick and Charity Griffiths were fourth with a gross score of 55 (net 46.95).

On Sunday, 24 players held their annual past captains day. Keith Griffiths won the men’s competition with 41 points with Allan Dishington runner-up with 40. In the ladies competition Issy Wiggins took the honours with 42 points with Carol McIntosh runner-up on on 41.

Nearest the pin for the men was won by Paul Scrivener whilst Elaine Elliman won the ladies competition.

The longest drive for men was won by Alan Thompson with the Wiggins winning for the ladies.