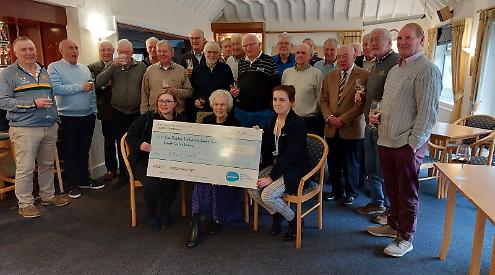 A GROUP of golfers has raised £6,000 for charity in the memory of one of its players.

Martyn Jordan, who passed away last year, was a member of Henley Golf Club for more than 40 years and was men’s captain in 1991.

Every Christmas, members of the club’s Red and White Wine Elderly Gentlemen Golfers Society, or RAWW EGGS, play golf and then have lunch.

This is then followed by an auction to raise money for charity. Previous beneficiaries include Cancer Research and people affected by Motor Neurone Disease

The event has not taken place for two years due to the coronavirus pandemic but Mr Jordan’s widow, Vicky, agreed that December’s event could be used to raise money for Sue Ryder’s South Oxfordshire palliative care hub, near Wallingford, which looked after him.

Co-organiser Michael Herriot, of Valley Road, Henley, said: “Over the years, when a member has passed away, we have looked to raise money for a charity connected with them and we approach their family for permission to do so.

“We are a group of some 33 golfers who meet to socialise and play golf every Monday, Wednesday and Friday.

“As part of it, there are a series of fines that we use to raise money and they were in place this year from October in the run-up to the event. These include a £5 fine if you look at your phone while in the clubhouse and, if it rings, it’s a £10 fine.

“The phone of one of our members rang three times during the seniors’ annual meeting and he was duly punished.

“You were also fined if you lost your cool while on the course and, in total, we raised nearly £500 in fines.

“The rest of the money came from a couple of donations from members and the auction, where members also donated items such as books and bottles of whisky.”

The group thanked members who paid their fines or donated prizes as well as businesses and others that also donated prizes — Westcoast, Henley Self Storage, Southern Plant, Badgemore Golf Club, The Caversham Golf Glub, Oxford Golf Club, the Henley Hawks and the Falle family.

Meghan Bentley, community fundraiser at Sue Ryder, said: “Thank you very much to the members of RAWW EGGS for their generous donation to support the compassionate care we provide in the community.

“The funds raised will ensure we can continue to be there when it matters for local families, helping patients in our care experience as much comfort as possible at the end of their life.”