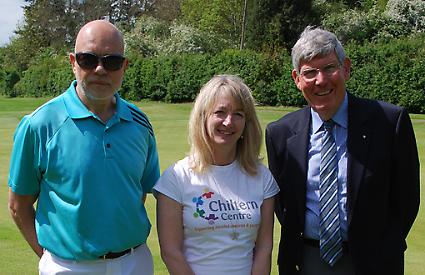 A total of £1,500 was raised for the centre for disabled children in Greys Road as 11 teams took part in the competition.

The teams teed off at 9am and played 18 holes using the Stableford scoring system. There was an additional £10 prize up for grabs to anyone who could hit the green from the tee on the difficult 16th hole.

After the contest, the golfers were treated to a buffet lunch in the clubhouse and took part in a raffle with prizes including brunch at Hotel du Vin, a free round for four at the golf club and vouchers for Laurence menswear in Duke Street.

The trophies were also handed out to the winning teams and guests took part in a game of heads and tails with sporting trivia.

Organiser Emma Lerche-Thomsen said: This is our fifth tournament and in that time we have raised £10,000 for the centre.

Its been sponsored this year by Ward Connections and Chris Ward has been a big supporter of the charity for 10 years.

We also couldnt do it without Muriel Quinsac, shes a former ladies captain and helps us get teams together every year.

We have at least five teams who have turned up to every tournament and about half of the people from last year are taking part again today.

Ms Quinsac, chairwoman of membership and marketing at Henley Golf Club, said: We are always very happy to host the Chiltern Centre golf day. We are delighted to help raise funds for the centre. Its usually a very well supported and fun day and we encourage people to come along.