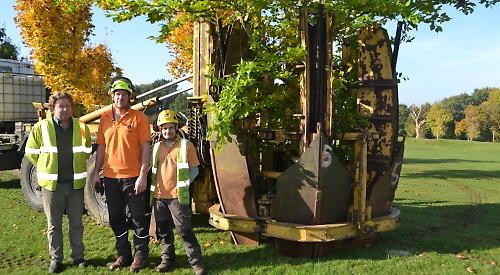 QUESTION: How do you move a well-established tree without damaging it?

The answer is with this giant “tree spade” which was put to work at Henley Golf Club last week by Hugo Loudon, of Heritage Tree Services, digging up five trees and moving them to new locations.

The £50,000 machine’s six hydraulic-powered blades dug deep beneath the roots of each tree before picking the whole thing up and moving it to its new home. The machine was also used to create the new hole.

Mr Loudon, who bought the machine in New York three years ago, says: “It is one of the biggest in the UK and means we are able to move trees rather than fell them. It is able to relocate trees up to 25 years old. With the housing demand in Henley, that is very important. There is an element of shock for the trees so they need to be prepared and there is after- care as well.”

Club greenkeeper Justin Robinson said: “We decided to do this for the playability of the course and to segregate two holes.”