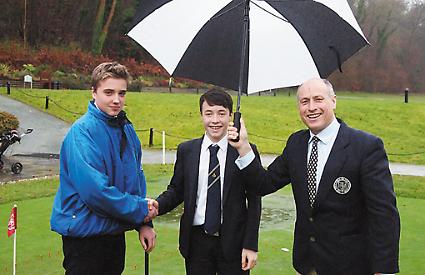 WILL SYKES ran out winner of the Kathy Sparks Trophy for lower handicap players at Henley Golf Club on Monday of last week.

In the junior section’s annual end-of-season competition, which was competed for by 47 golfers in stormy conditions, Sykes pipped Angus Harris-White on countback, both players scoring to their handicap. The Junior Sparks Trophy was won by Kate Hillas from Lois Meredith and the Young Sparks by Sophie Hillas from Taylor Davis.

Due to the bad weather, the traditional captain’s drive-in was replaced by a putt-in on the soggy practice green. Suilven Wagner-Piggott was confirmed as 2014 Junior Captain.

The annual prize-giving followed with more than 30 presentations marking the end of one of the most successful seasons ever for the junior section.