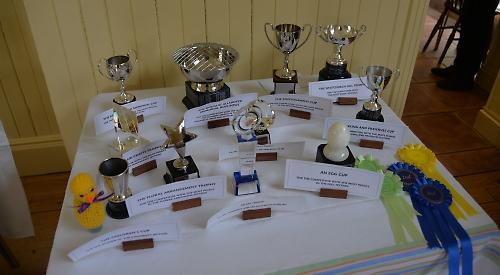 THE Goring Heath and Whitchurch spring show had a higher number of entries than last year despite the recent poor weather.

Twenty-four people entered the event, which took place at Goring Heath parish hall on Saturday, compared with 21 last year, and there were 128 individual entries compared with 121.

Vivien Chambers, from Whitchurch, was awarded the Whitchurch Hill Trophy for winning the most points overall.

She won the art trophy after submitting three works, including one based on Moorish geometrical patterns she saw at the Alhambra palace in Andalusia, and the combined arts and crafts award for her knitted baby’s bonnet and decorated box.

She also took the photography prize for three images, including one of her husband John walking by Sulham Brook, near Pangbourne.

Mrs Chambers, who has been competing for the past decade, said: “It’s the best I’ve ever done, which I think is because I had enough time to make the effort and submit lots of different entries.

“I feel great to have done so well because previously I’ve only won the odd individual class or just one trophy.”

Other winners included Peter Dragonetti, chairman of Goring Heath Parish Council, who won the Betty Hayter Memorial Cup for most points in the flowers section and the baking and preserves cup.

Sue Sexon, who organises the show with Liz Gibson, said: “It was a very successful afternoon and I was staggered to see we had more entrants than last year.

“The weather had been so poor that I worried we’d have practically nothing but we had a warm spell immediately beforehand and that brought everything along nicely.

“We didn’t have any tulips but the daffodils and the rest of the spring produce turned out beautifully.”

Whitchurch Hill Trophy for most points in show: Vivien Chambers.