‘Spy’ training centre could open at former air base 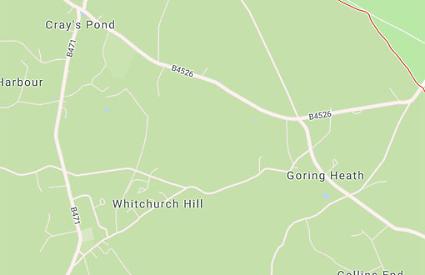 AN old air base could be converted into a training centre for bodyguards, private investigators and police and military personnel.

It currently operates from a site off the B471 at Whitchurch Hill.

The barn would be 32ft tall, about 115ft long and located at the southern edge of the site, away from the main road and bordering the Camelid Veterinary Services clinic, which opened at a disused barracks on a neighbouring plot in 2016.

It would be made to look like a farm building and trees and hedges would be planted around the perimeter.

An earth mound to the north of the site, in front of the main entrance, would screen it from view. The plan also includes five huts that would be used for overnight accommodation for up to 10 people.

These would replace five Nissen huts that served the air base, which was decommissioned in 1959 and was later used as a poultry farm but has been derelict since 2011.

The remains of the base’s washblock would be refurbished to form communal toilets and showers while the fire station would serve as a second training centre with classrooms, storage, a kitchen and office.

Mr Morphy’s agent Marc Willis has told South Oxfordshire District Council, the planning authority, that the site was no longer fit for agricultural use because of the cost of removing the hard-standing and a number of old farm vehicles.

The training centre would bring the land back into “gainful use” instead of being a magnet for fly-tipping and would create jobs for cleaners, caterers, groundsmen, handymen and instructors, about five of whom would be directly employed.

Mr Willis said: “The site presents a spacious and fairly unique location for security training courses to be conducted, benefiting from being in a rural setting and screened from the hamlet of Goring Heath by pockets of woodland to the east.

“As a result, there is very little scope for having a negative impact on local residential amenity. Indeed, the nearest residential properties are located more than 140m from the eastern boundary.

“The site, if left in its current condition, has very little scope for contributing to the rural economy. The former use for keeping poultry makes only a very modest contribution to the rural economy in comparison to that proposed, with fewer direct and secondary employment opportunities.

“The proposed scheme is a sustainable and innovative redevelopment solution for a disused brownfield site which has fallen into a dilapidated state.”

Goring Heath Parish Council has recommended that the application is turned down.

Chairman Peter Dragonetti said: “It’s inappropriate because of its scale and the fact that it’s a commercial development in the Chilterns Area of Outstanding Natural Beauty.

“The site had been a farm for many years so we don’t see why there’s a problem restoring it to that use. It’s easy to let a site become ugly then claim a completely different usage is the only alternative but that shouldn’t be an excuse.

“[This] massive great warehouse building would look out of place and goes against planning policy on rural businesses because it’s a new venture. It would be one thing if an existing company was successful and needed to expand but that is not the case here.

“Ultimately, we can’t see any difference between this proposal and a warehouse or any other industrial usage.”

Mr Morphy, a former army corporal who won a Queen’s Commendation for bravery in 2008, did not want to comment.

South Oxfordshire District Council will decide the application by November 1.

RAF Woodcote, also known as 70MU, was built in 1941 and served as an equipment distribution depot and housed German prisoners during the Second World War. It was eventually deemed surplus to requirements by the Ministry of Defence.