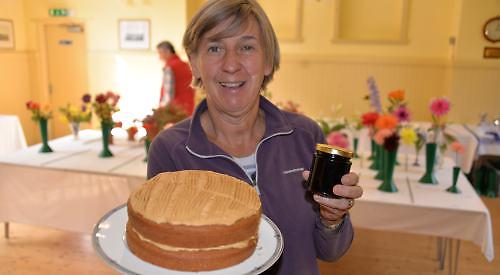 THE joint organiser of Goring Heath and Whitchurch’s biannual flower and produce show is stepping down, writes James Burton.

Sue Sexon, who joined the organising committee about a decade ago, said the show no longer attracted enough entrants.

She was speaking after this year’s autumn show at Goring Heath parish hall, where there were 27 entrants with 128 entries across seven sections, including fruit and vegetables, flowers, flower arranging, arts and crafts, children’s entries, baking and preserves and photography.

Mrs Sexon said the standard of entries was high but there simply weren’t enough to create a competitive atmosphere.

She and co-organiser Liz Gibson took home four of the 11 main trophies and her husband David, a long-standing supporter, won another two.

Mrs Sexon, 72, said: “This year went well enough but I feel it’s too much work compared with the small number of people who actually take part. When you’ve got only 27 entrants, including children, there isn’t enough competition.

“We see the same people every year and most only enter one or two items so it falls to a small number of entrants to do the bulk of the work.

“My husband had 18 entries, which was a big proportion, and he has said he won’t enter next year. I spoke to one former committee member who said it didn’t feel like a proper win when there weren’t that many others taking part.

“I’m not sure there’s much we can do as a lot of people aren’t into gardening any longer.

“The world is changing — people are busier now so they have low-maintenance gardens or even flats with none. It’s mostly older people who still have gardens and it’s a lot of work for them.”

Similar concerns have been raised about the Goring Village Greenfingers summer show, which this year attracted only 15 entrants, although no decision has been taken on its future.

Mrs Sexon said there had been talks about merging the show with other events in the area but none took place on a suitable date.

She won’t leave until after she has helped Mrs Gibson to run the spring show on April 11.

Allotment Cup for most points in fruit and vegetables — Tricia Bland

Cup for most points in flower arranging — Sue Sexon

• The themes for the photography section of the next Goring Heath and Whitchurch spring show are “scenes from a bridge”, “a celebration” and “a water activity”. More information will be posted nearer the time at www.whitchurchonthames.com