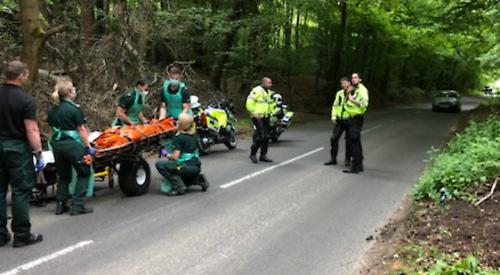 A WOMAN was seriously injured when her horse was spooked by motorcyclists and fell on top of her.

Anna Tomson is now in an induced coma in hospital following Sunday’s incident, which took place on a bridleway off Deadman’s Lane in Goring Heath.

The 41-year-old suffered what police called “life-changing” injuries and was treated by paramedics at the scene for more than four hours before undergoing several operations at the John Radcliffe Hospital in Oxford.

Two men have been arrested.

Miss Tomson, of Upper Woodcote Road, Caversham, was hacking alone on her four-year-old horse Berry when a group of five off-road bikers suddenly roared across the bridleway about 100 yards behind her from a clearing in College Woods.

The horse, who was terrified by the unexpected noise, reared up to bolt but stumbled backwards on the hill and landed on top of the rider. Despite drifting in and out of consciousness, Miss Tomson called Sarah Peters, who runs the yard at Cane End Stud where Berry is stabled.

Miss Peters, who is a close friend, said: “Anna told me she’d fallen off so I asked ‘Are you all right?’ and she replied ‘No, I’m not’.

“I asked where she was but I couldn’t work it out from her description and passed it to my colleague but soon after that she passed out. We had some idea but didn’t know how deep into the woods she was.”

Miss Peters and her colleague raced to the area but struggled to find Miss Tomson.

She was found unconscious by a pair of walkers who called 999 and alerted Miss Peters when they noticed she was the last person whom Miss Tomson had phoned.

Several ambulances arrived followed by a pair of doctors from the Thames Valley Air Ambulance which had to land some distance away because of the woodland.

They spent hours trying to stabilise Miss Tomson, who was in severe pain and experiencing rapid drops in blood pressure, before it was safe for a specialist medical rescue unit to load her on to an off-road trolley.

Residents of a house nearby helped to shuttle oxygen tanks
between the scene and the ambulances parked on the main road.

Miss Peters said: “Anna was so unstable that she couldn’t be moved for a long time and I have no idea how she survived.

“At times she was crying out in pain saying, ‘I can’t do this —  it hurts, it hurts’. The paramedics and doctors did an amazing job. They had to administer a lot of drugs, do ultrasound scans and carefully cut her clothes off before they could load her on to the board. Her blood pressure kept going right down and they had a line in her to keep on top of that.”

Despite her condition, Miss Tomson was able to explain what had happened.

Bystanders called the police as the suspects were still zipping in and out of the private woodland on their bikes, seemingly oblivious to what had happened.

They had apparently arrived in a Ford Transit and were tearing around at high speed, stopping periodically to refuel from a supply inside the van.

Miss Peters said: “We saw four others in the area and warned them off because we were worried about the same thing happening to them.

“Anna had high-viz gear on so it’s not as if they wouldn’t have seen her — we could definitely see the bikers through the woods so they should have been aware.

“They weren’t directly behind her but they were going so fast that the noise was horrendous. Normally Berry is fine but the bikes were so loud that any horse would have reacted in that way.

“The owners of the woodland said they shouldn’t have been there. This left someone hanging on for their life and it should never have happened.”

A large number of police cars, motorcycles and vans attended the scene and officers arrested two men, both 22, one from Earley and another from Woodley.

Both have been released under investigation. Five off-road bikes and a van have been seized.

Miss Peters said: “The police have been incredible, both during the incident and in staying in touch with us afterwards.

“They were quick to act and had the woods surrounded straight away.

“At one point one of the men turned their bike around so I said it looked like they were going to get away but an officer said ‘don’t worry, we’ve got Tasers’.”

Miss Tomson was put into a coma in hospital to aid her recovery and she is said to be in a serious but stable condition.

Miss Peters is now supporting her elderly mother, who also lives in Caversham.

She said: “I’ve always been the one Anna rings when there’s a problem. She doesn’t have any family nearby apart from her mother so we’re very close and often meet for dinner.

“It’s difficult for her family because they can’t visit her in hospital due to the coronavirus restrictions. They’re sometimes having to come to me for information.

“I’m really angry at the people responsible but more upset about Anna. Once everything had calmed down I was very much in shock and became very cold and tearful. I still feel very emotional now because I’m so worried.

“I’m not sleeping because I know she’s going to face such a long road to recovery and I keep waiting to hear from her family in case anything happens. So many people in the community are concerned —  she is a very talented rider and people love her.

“She did at least have luck on her side because that path was only busy due to the lockdown. People were walking and cycling because it’s all they’re allowed to do — normally it’s deserted.”

Miss Peters has launched a campaign to raise £30,000 to help her friend through her recovery.

The proceeds will pay for Berry’s upkeep and Miss Tomson’s living costs as well as any treatments not covered by the NHS such as physiotherapy.

Miss Peters will look after her friend’s horse free of charge and a number of equine specialists have offered their services at no cost.