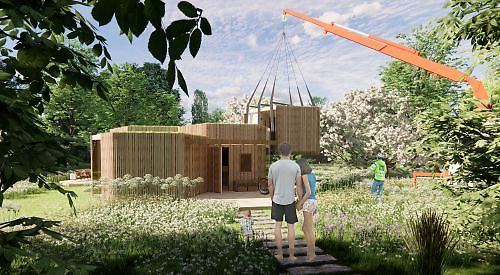 PLANS to build affordable modular homes near Woodcote have received a mixed response from councillors in the area.

They were responding to a proposal by two entrepreneurs to help address the climate emergency and affordable housing crisis.

Giles Lovegrove, an architect, and Dave Wallace, who is a business owner, have set up Plan B Housing to create modular homes which can be extended as the owner’s circumstances change, as the Standard exclusively reported on December 3.

The hexagonal units would be built on small pieces of grazing land, such as a horse paddock, and could be extended with new modules as the owner’s family grew. The rest of the land would be rewilded.

The pair have earmarked three sites near Woodcote for pilot schemes and have already built a
60 sq m prototype version in Mr Wallace’s garden in Henley.

The plans were welcomed by Jo Robb, who represents Woodcote and Rotherfield ward on South Oxfordshire District Council for the Green party.

“It’s really exciting,” she said. “We should be looking at environmentally friendly ways of meeting our housing needs.

“There are lots of examples elsewhere of companies making modular, low-carbon flexible homes that can be made quickly. In Germany, they use things like this all the time.

“The difficulty we face in planning is an industry which is stuck in the past, not thinking of new ways to provide affordable homes. We need innovators.

“I think living on a nature reserve would be very attractive to people. Most affordable homes provided are in the corner of big developments with an overwhelming amount of tarmac.

“We need to be looking at this as a way forward. I can’t see there being much objection — what is there to object to?” Geoff Botting, a Woodcote parish councillor and chairman of the Woodcote neighbourhood plan advisory group, said: “I’ve got no objection in principle to modular homes but they will have to meet the policies of the South Oxfordshire local plan and the Chilterns design guide.

“I support affordable housing but I think they’re going to fall foul of planning policies.

“The rural exception policy that they’re relying on only permits building outside settlements if it meets an outstanding local need which can’t be met elsewhere.

“There’s a lot of space in the district that isn’t in the Area of Outstanding Natural Beauty where the need could be met.

“I think their design will struggle because it doesn’t fit in with the Chilterns design guide.

“I understand the reasons behind it and what they’re trying to do architecturally but the design needs to be sympathetic. They must look like proper Chiltern buildings.

“I can see a lot of people objecting because they simply don’t look like Chiltern buildings.”

Councillor Botting added: “We understand the difficulty with house prices and how that makes it hard for people to get on the ladder.

“Once our neighbourhood plan is approved, we will have taken a significant step into providing low-cost housing.”

Malcolm Smith, chairman of Woodcote Parish Council, said: “We’re not averse to affordable housing — it’s a feature of our neighbourhood plan — and I’m not totally averse to modular buildings but they need to be in keeping with the setting.

“Some of them are just boxes dumped in the landscape which are not really appropriate for this area.

“I also don’t think they’ll comply with the rural exception policy because that talks about not having isolated settlements and that building shouldn’t be in the AONB.

“A hexagonal shape seems a bit odd to me when you think about finding furniture.

“We’re in favour of environmental improvements and biodiversity but the rewilding sounds a bit like an excuse as you can rewild without building homes.

“I also don’t agree with the implication that a paddock for a horse is a waste of space. Small paddocks surrounded by trees are very characteristic of the AONB and many do have quite good biodiversity.”

Lorraine Hillier, Conservative councillor for the Woodcote and Rotherfield ward on the district council, said: “I think it’s a fantastic initiative.

“I’ve always liked the thought of wooden houses in rural areas because they’d really blend in.

“Normally when people decide to build affordable homes in rural areas the issue is that the homes don’t blend in and they’re not usually nice homes architecturally.

“Someone has come up with some interesting architecture and it’s what we need in terms of being low carbon. Affordable homes shouldn’t have to be poorly designed.

“I think the idea of modular homes is interesting, so that people can build on and expand their home as their family grows.

“I’d live in one and they look great for families and key workers and people at that stage of life.

“The problem we have now is people living in cramped circumstances. They get put into flats and can’t afford to move anywhere else, so children are growing up without the space they need.

“We need to make sure life starts well and this provides that opportunity. I hope that planning will look at this very seriously.”