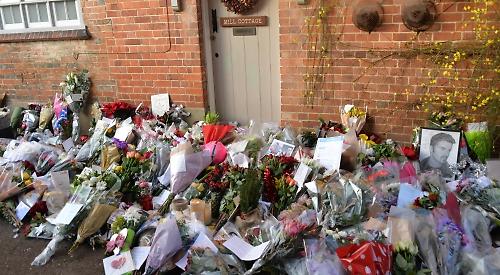 TRIBUTES have been paid to pop icon George Michael, who died at his home in Goring on Christmas Day.

Hundreds of mourners from across the country have visited the village to pay homage to the singer, leaving flowers, cards with messages, framed pictures, candles, drawings and memorabilia outside Mill Cottage in High Street.

Michael, 53, was found by celebrity hairdresser Fadi Fawaz, with whom he had been in a relationship since 2011.

The emergency services were called to the property at 1.42pm on Sunday and the former Wham! singer was confirmed dead at the scene.

Thames Valley Police said the death was being treated as unexplained but not suspicious. His manager Michael Lippman said the singer had died of heart failure.

Mr Fawaz said: “We were supposed to be going for Christmas lunch. I went round there to wake him up and he was just gone, lying peacefully in bed. We don’t know what happened yet.

“Everything had been very complicated recently but George was looking forward to Christmas and so was I. Now everything is ruined.

“I want people to remember him the way he was — he was a beautiful person.” Michael, whose real name was Georgios Kyriacos Panayiotou, had owned the house in Goring since 1999 and was seen in the village quite often, although his main home was in Highgate, north London.

Tim Schulz, who ran the Catherine Wheel with his partner James Dawe until February, said the singer visited the pub regularly.

He said: “A lot of people have been saying he was shy but when he came into the pub he did not hide away. He was part of the atmosphere and brought friends in with him at different times.

“We would try to make sure no one bothered him but if someone came up and asked for an autograph he would always do it. He was a very calm, normal guy.

“He loved scampi and chips — it was his favourite meal.”

Mr Schulz added: “I was absolutely gutted when I saw the news. It’s a terribly sad loss for Fadi, especially to find him on Christmas Day.”

Mary and Nick Galer, who run the Miller of Mansfield pub, which the singer also frequented, posted a tribute on Facebook on Christmas Day.

They said: “Such sad news in the village today. With great sadness we send our heartfelt condolences to the friends and family of our neighbour and patron George Michael.”

“He didn’t come this year,” he said. “He had decorated his garden with Christmas lights so we knew he was there but we didn’t see him.”

In Michael’s garden were two reindeer sculptures lit by fairy lights while a Christmas wreath covered in apples, berries and pine cones hung on a side door.

Parish councillor Catherine Hall said: “Goring had a great celebrity who quietly lived his life among us and provided an amazing backdrop to our Christmas Eve torchlight procession with his fantastic garden decorations.”

Among the hundreds of tributes left outside the singer’s home was a pink football and a cross made from images of the singer as well as dozens of candles.

There were also scores of cards with personal tributes and messages such as “you changed my life forever”, “thank you for your music” and “you will be eternally adored, you were a really big part of my life, I hope you find peace”.

Sobbing fans consoled each other while they read the tributes.

Julie Green, from Pangbourne, said: “I loved his music and wanted to pay my respects as he lived locally.”

Carrie Denton, from Upper Basildon, said: “It really struck me how peaceful it is here — everyone is so respectful and quiet, which is lovely to see.”

Fan Beverley Edwards travelled from Camberley in Surrey to lay some flowers.

She said: “I was so shocked when I heard the news so I thought I should come to pay my respects. It’s so sad he has gone.”

Steve Russell, from Haddenham in Buckinghamshire, said: “I grew up with him, from Wham! through his solo career, and he has always been my idol. I saw him at Wembley for the final Wham! concert.

“I had to come and pay my respects. He was a superstar and my idol. His music will live on.”

In a statement, Michael’s family said: “The family and close friends of George have been touched beyond words by the incredible outpouring of love for him in the hours and days since his death.

“For someone whose life was ultimately about his music and the love he had for his family and friends, his fans and the world at large, there could be no more fitting tribute than the many, many, kind words that have been said and the numerous plays his records have received.”

Michael formed Wham! with his old school friend Andrew Ridgeley in 1981 and they had a string of hit singles and albums before splitting up in 1986.

In the following spring he released I Knew You Were Waiting (For Me), a duet with one of his musical icons, Aretha Franklin.

He went on to have a hugely successful solo career, selling more than 100 million albums and hit singles including Careless Whisper, Faith, Outside and Freedom! 90.

He had 11 UK No 1s during a career spanning almost 40 years. His last album, Symphonica, was released in 2014.

Art publisher Peter Burness-Smith, of St Mark’s Road, Henley, recalled working with Michael in the run-up to his performance at Live Aid in 1985.

He and Ridgeley joined Elton John on stage for a rendition of Don’t Let the Sun Go Down on Me.

Mr Burness-Smith, who helped organise the event, said: “When he came on stage, it was one of the key moments in Live Aid. Then he went back on stage for Band Aid’s Do They Know It’s Christmas?

“For a man who sold 100 million records and lived in the public eye as a superstar, he had a knowledge and respect for popular culture and popular music.”