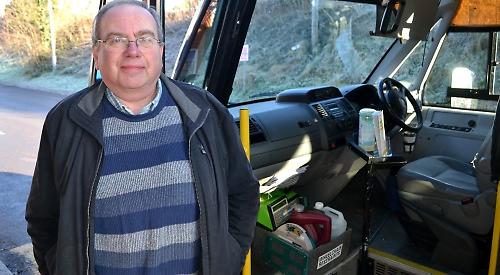 AN accountant could have saved two bus routes serving Goring, Whitchurch and the surrounding villages.

Mike Ward, 56, of Elvendon Road, Goring, is to take over Go Ride’s 134 service from the village to Wallingford via South Stoke at the end of the month.

The route was originally run by Thames Travel but axed when Oxfordshire County Council cut all its bus subsidies last year.

Go Ride, a community interest company from Essex, took over on a non-profit basis but is having to pull out because of staffing and logistical problems.

Mr Ward believes the 134 is still viable and has formed a new operating company called Going Forward Buses to run the service on a not-for-profit basis.

He also hopes to launch a second service that would call at Whitchurch and Whitchurch Hill in place of Thames Travel’s 143 service, which links the villages with Reading. Whitchurch and Goring Heath parish councils currently subsidise their leg of that route after the county council withdrew its funding.

Last year, the councils agreed to raise council tax to keep the service going on a commercial basis after conducting a survey which showed most villagers backed the idea.

However, the maximum tax increase allowed by law won’t raise enough so they must find a way to make up the shortfall.

Mr Ward, who has lived in Goring all his life, will continue using Go Ride’s two 14-seater minibuses and hopes to buy a third for the new route. He will reinvest any profits in improving the service.

He said: “I’ve always recognised the value of public transport and still fondly remember my mum taking me on the old Chiltern Queens bus to Wallingford as a child. I helped Go Ride with the takeover and when it announced it was backing out I wanted to make sure it could continue.

“Go Ride has its reasons but the route itself isn’t making a loss. It doesn’t make a big profit and nor would I want it to but it covers its costs.

“Hopefully it will continue to be supported as its success will depend on the number of people using it.

“I’ve been talking to some of the passengers and have realised it has huge value as a social service, not just a mode of transport. Many of them are concessionary pass holders and it’s their way of getting out and meeting other people.

“They chat to the driver and the other passengers and it gives them a bit of purpose, structure and entertainment. One passenger told me they’d just be ‘rotting away’ at home without it so you can see how important it is.

“The more I’ve learned about it, the more determined I’ve become that it should survive.”

The company’s second route could go from Goring to Whitchurch and Whitchurch Hill via Pangbourne, then on to Reading or even Henley while stopping at the villages in-between.

Mr Ward is analysing Thames Travel’s figures for the 143 to decide whether such a service would pay for itself or require subsidy from the parish councils.

He said: “It’s in the very early stages as there are various challenges we’d need to overcome.

“The 134 is my main priority for now but I’m keeping my eye out for a suitable vehicle and possible drivers.”

Whitchurch parish councillor Dave Bowen said: “His plan for the 134 makes so much sense and I’m completely behind something similar for Whitchurch. There are lots of elderly and disabled people in this area so it could really come into its own.”

Peter Dragonetti, chairman of Goring Heath Parish Council, said: “I don’t think it would be sustainable for us or Whitchurch to carry on funding Thames Travel ad infinitum. so it’s good that Mike has come up with a possible alternative that looks quite promising.”