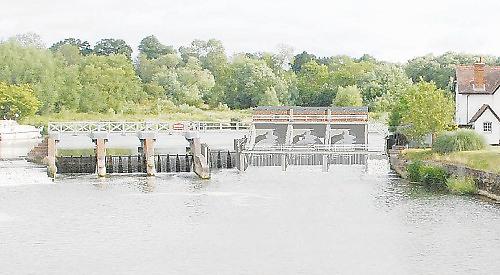 SOUTH Oxfordshire District Council is facing a formal complaint over its handling of planning applications.

Goring Parish Council claims the planning authority is guilty of maladministration by not defending the village from unwanted development on two occasions.

It is to write to council chief executive David Hill, demanding an apology and that planning director Adrian Duffield is reprimanded and planning officers are given more training.

If Mr Hill disagrees, the parish council will complain to the Local Government Ombudsman.

The move comes after the district council approved plans for a hydro-electric power plant at Goring weir and failed to stop Network Rail’s installation of “unsightly” steel gantries along the railway line through the village in 2015.

The first scheme, submitted by the village’s sustainability group, will comprise three 12ft wide Archimedes screws with a turbine and generator to the north of Goring bridge.

The £1.5million project should generate enough power for about 300 homes, which would be sold to the National Grid under the Government’s “feed-in” tariff with a share of proceeds benefiting environmental projects.

The parish council opposed the idea, saying it posed a flood and noise risk and could threaten wildlife habitats by reducing oxygen levels in the water.

However, the district council argued that the benefits of sustainable energy outweighed any potential harm.

The parish council took its fight to the High Court where a judge agreed the district council hadn’t followed correct procedure but let the decision stand as he felt it didn’t affect the outcome.

He said the authority failed to give “considerable importance and weight” to the impact on Goring’s conservation area and should have carried out an appraisal of the buildings within it.

He said the parish had “expertly exposed” flaws in the process so declined to award the district’s costs.

The parish council has requested an appeal hearing, saying a failure to follow procedure should be a good enough reason for the decision to be taken again and says the district must carry out a conservation area appraisal before the end of the year.

It also argues the district should have pursued enforcement action against Network Rail when it installed the gantries as part of an electrification project almost two years ago.

However, the line through Goring falls within the Chilterns Area of Outstanding Natural Beauty, where any development must “preserve or enhance” its surroundings and public consultation is required.

Network Rail has agreed to consult on alternative designs following protest by a residents’ action group but the parish council says the district should have taken the lead on this.

Councillor Bryan Urbick, who is leading the complaint, said: “Beyond the High Court judgement there is additional evidence from the case of the council’s failures, indicating either a disregard for facts or a failure to properly consider the matter by a poorly trained or poorly managed team.

“Had they highlighted Network Rail’s failure in law, it is highly unlikely that the current structures would have been erected until a consultation had been done.

“It is the district council’s responsibility to preserve and enhance the AONB and, as planning authority, it had both the power and means to have stopped Network Rail until they had properly consulted. I believe these instances to be evidence of a systemic problem, not simply over the weir application.

“If the planning director and leadership team are not held accountable, the situation is not likely to improve.”

The district council said it reviewed the status of its conservation area appraisals annually but only had the capacity to produce one new appraisal per year.

A spokesman said: “We value our relationship with all our town and parish councils and we are going to invite Goring Parish Council to meet us so that we can discuss their concerns.

“Parish councils’ views are taken into consideration when we make decisions on planning applications, which are ultimately decided on their merits. This was reflected in the High Court’s recent ruling on the Goring weir application.

“We are always open to receiving constructive feedback about our services and procedures and continually look to improve where we can.”