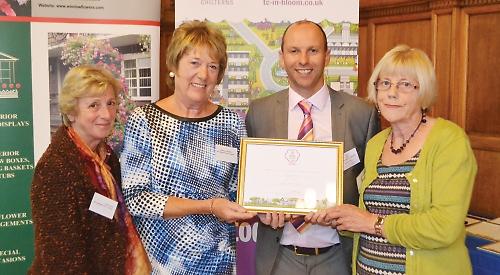 GORING is to enter this year’s Britain in Bloom competition after a year’s absence.

The village competed for four years from 2012 to 2015 during which time it won two gold awards and two silver gilts in the small town category of the Thames and Chilterns region.

However, it pulled out last year after a row over funding with Goring Parish Council.

Organisers said they didn’t want to enter the contest because the council was taking too long to process a grant, meaning their financial situation was uncertain.

The council replied that it needed more information about how the money would be spent and, if it had had this, the grant could still have been approved before the entry deadline.

This year the Goring Gap in Bloom committee has secured a £1,275 grant from the council plus additional funding from Great Western Railway and community groups including Goring Gap News and the Greenfingers gardening club.

About 45 hanging baskets will be planted up in May and hung around the village the following month and there will also be a number of decorative troughs and planters.

The committee is using a new type of basket with a built-in reservoir so they will only need watering twice a week rather than daily, relieving the pressure on volunteers. There will be more planting in the wildflower meadow that it created in the grounds of the BT telephone exchange off Station Road last summer and new tubs at Goring station as well as an earth bank with assorted shrubs and trees by the eastern platform.

A memorial bench to Peter Mortimer, a former Goring parish councillor, will be installed by the plant beds at Gardiner recreation ground, which was transformed from an overgrown patch of land some years ago. The seat will be provided by Mr Mortimer’s widow Rosie.

Stephanie Bridle, who chairs the committee, said: “We’ve had various meetings, raised some funds and now we’re all ready to go.

“We’ve got more shopkeepers involved and we’ve got help from groups like the WI, who have offered to plant bulbs around the village, so our profile is very much increased.

“We’re looking forward to working on the station because it looks quite bare and functional at the moment. We’re going to be planting up quite a large area and it should make a big difference.

“I think the organisers of the competition have welcomed us back with open arms as they’re very keen for people to enter.

“It’s good for communities as it encourages them to look around with a fresh pair of eyes, see where the grotty bits are and find ways of improving them.

“It’s important that we keep the village looking nice. We’ve obviously had a lot of visitors since George Michael’s death and I’m pleased to say they’ve given a lot of good feedback. They’re all very impressed with how beautiful Goring is.”

The committee will be raising funds at a plant sale on Rectory Garden from 10am on April 29. Plants and hanging baskets will be on sale along with seeds, books and other gardening-related goods.

Volunteers are still needed for a range of tasks over the coming months, including weeding, tidying and watering.