School improves road safety after pupil is struck by car 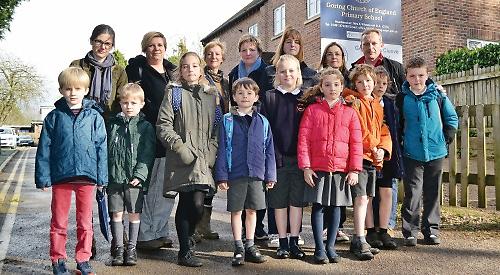 NEW safety measures are to be introduced on the road outside Goring Primary School after a pupil was knocked down by a car while crossing.

The school’s parent-teacher association has set out to raise £2,640 for two pairs of flashing lights to be installed about 200 yards either side of the school entrance in Wallingford Road.

The lights will be switched on during the morning and afternoon school runs when an advisory speed limit of 20mph would apply.

They will replace the existing 30mph “radar” signs which light up when drivers approach them too quickly. These were installed in the late Nineties to improve safety at the school but parents say they are ineffective as they are too small.

The new lights will be accompanied by a triangular sign warning motorists to watch out for children and Oxfordshire County Council is to repaint the yellow road markings outside the school. The PTA is also considering starting a campaign for a crossing patroller.

The fund-raising drive follows an incident on September 21 when a boy was struck while he and his family were crossing the road near the junction with Lockstile Way.

A driver travelling to Wallingford from the village station had stopped to let the group cross the road but the driver behind failed to stop and struck the rear of the vehicle, knocking it into the youngster.

The boy was taken to hospital with a broken leg and has since made a full recovery.

Parents had previously voiced concern that an accident could happen because the road near the school is narrow and often lined with parked cars. When one lane is blocked by a lorry or bus, drivers often mount the pavement to get past.

They asked the county council for solar-powered warning lights but were told this would cost £10,000 and the school would have to pay for them.

The parents then asked Goring parish councillors Emrhys Barrell and Bryan Urbick for help and they proposed replacing the radar signs, which are connected to the mains.

The county council said this would cost £4,800, including an upfront contribution of £2,600 to maintain them for the next 30 years.

However, the parish council has agreed to take ownership of the signs, reducing the cost to £2,200 plus VAT.

Councillor Barrell said: “The county council agrees that this is a better option for warning people about the school.

“The existing signs are no bigger than an A4 sheet of paper whereas these are more visible, set a lower speed limit and actually give motorists a good reason to slow down.

“As a driver, I’m terrified using that stretch of road because you have kids whizzing along on their scooters on a stretch of pavement no more than 3ft wide.

“There are some tiny white signs saying ‘school’ but they’re covered in overgrown hedges and it’s bonkers that there isn’t better signage. This proposal has no monetary implication for the parish council.

“There is minimal energy cost and no out-of-pocket expense yet it would do a great deal to enhance the safety of our local students.”

So far the PTA has raised more than £500 by holding a safety day when children learned about crossing roads safely.

School governor Claire Slade, who is leading the campaign, said: “I’m absolutely thrilled that the parish council is supporting us.

“We’d been trying to get the signs before the accident but all we were getting back from the county council was high bills.

“Emrhys and Bryan were incredibly helpful in finding an achievable alternative that greatly reduced the bill. These lights will benefit the entire community and not just the school by making the street safer.

“The trouble is that the school isn’t very visible from the road and many drivers don’t realise it’s there. The county council agrees that these lights will raise awareness and make motorists think twice about their speed.

“We would like to pay for the lights ourselves but we don’t have the money and very much hope the community will get behind us.”