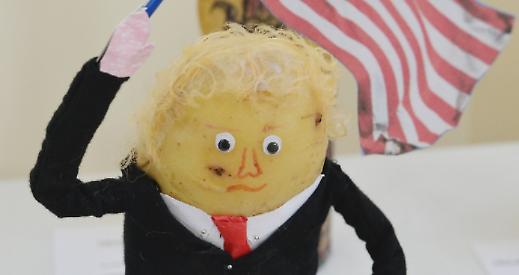 A POTATO effigy of Donald Trump was among the winning entries at this year’s Goring Greenfingers spring show.

The figure of the American president, dressed with a miniature suit and tie and a blonde wig made from dolls’ hair and sticky tape, was entered in one of the adult craft categories by new club member Rosemary Brook.

The 60-year-old, who retired as head of art at Rupert House School in Henley two years ago, also came first in the spring bonnet class and won the prize for best patio container with a mix of flowering plants.

Mrs Brook, who lives in Whitchurch Hill with her husband Nigel and their three cats, said: “I thought of Donald Trump as soon as I knew there was a special ‘potato man’ category. You hear so many things about him on the news that are just beyond belief so it seemed appropriate.

“I’ve always enjoyed making things and couldn’t help but laugh as I was making his little suit from scraps of fabric on my sewing machine.

“I was really proud of how it finally turned out and it got a great reception — as soon as I entered the hall, everyone was very amused and wanted to know more about it.

“I was pleased to win three awards as it was the first time I’d entered a gardening competition and I will definitely be competing again in future. I’ve always enjoyed gardening but never had the time to get involved in things like this until I retired.”

Jacqueline Wilkins took home the Davis Cup for most points in show for the fourth time in five years.

Mrs Wilkins, of Cleevemead, Goring, scored 26 points after winning the vase of any other flower, vase of five different spring flowers, spring floral arrangement and lemon cheesecake classes and being placed second in seven other categories.

The runner-up was Jim Thomas, with 19 points followed by Margaret King with 17. The best adult exhibit was a pot of cyclamen entered by Patricia Bradstock, the show’s chairwoman, while the best children’s entry was a spring hat made by Alexandra Kenny, 10.

Mrs Bradstock said there were slightly more entries in this year’s show compared with last year.

She said: “It was such a lovely day — the sun shone through on all the exhibits and lightened everyone up. We had a lot of visitors from outside, not just club members, so we sold a lot of teas and made a nice little profit.

“I thought the potato Trump was absolutely brilliant and, along with the Easter bonnets, it brought a lot of colour and fun to the afternoon.”

Vase, one each of three varieties of narcissi — Jim Thomas

Vase of three stems of narcissi with more than one bloom on each stem — 1st Jim Thomas; 2nd Jacqueline Wilkins; 3rd Val Calladine