Village's painting of hero on permanent loan to RAF club 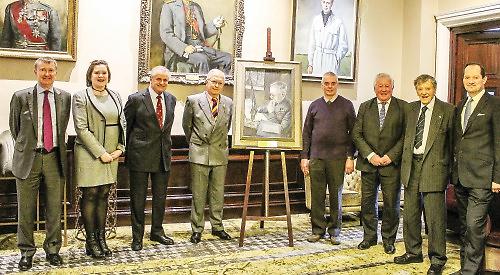 A FRAMED oil portrait of Sir Arthur “Bomber” Harris which once hung at Goring village hall is now taking pride of place at the Royal Air Force Club’s headquarters in Piccadilly.

It was painted in 1942 by David Rolt at Ferry House in Ferry Lane, Goring, where the Bomber Command leader lived, and was gifted to the community by Harris’s daughter Jacqueline Assheton upon his death in 1984.

The portrait had been displayed at various locations around the hall, most recently above the bar in the Bellême Room, and was taken down and put into storage when the building underwent refurbishment in January last year.

When the hall’s trustees went to return it a few months ago, they noticed it had started to deteriorate and feared its condition would worsen unless they found a new custodian that could care for it properly.

Committee member Bill Jackson, of Gatehampton Road, offered it to the RAF Club as his daughter Alice Harrison is an air force intelligence officer who has served in Afghanistan and other conflicts.

The club gladly accepted as the painting as it has very little memorabilia about Bomber Command or Harris, who oversaw a series of decisive air raids on German cities during the Second World War, including Dresden in 1945. The painting, which has been cleaned and will soon form the centrepiece of a new display about the history of the aerial bombardment unit, remains the trustees’ property but has been loaned to the club indefinitely.

Bernard Novell, who chairs the committee, said: “We made a conscious decision not to return several artworks to the hall as we wanted to move away from the past and look more to the future.

“The portrait wasn’t in a dramatically bad condition but it needed a good clean and a little bit of restoration work.

“David Rolt is a celebrated artist with paintings in some major London galleries so we decided the village hall was no longer an appropriate place for it.

“It still belongs to the village but we know it’s going to be looked after, which people in Goring are very much behind.

“I was worried that residents would see it as ‘giving away the family silver’ but people understand that it’s the right thing to do.” Mr Jackson, who attended an informal handover ceremony in London with Mr Novell, said: “The painting had been rather ignored and neglected and we were concerned that it could be damaged beyond repair.

“It needed a safe home because we imagine it is fairly valuable and we wanted to secure its future as we can’t be certain that future generations of trustees will be as diligent as us.

“The RAF Club is usually pretty choosy because it has hundreds of thousands of pounds worth of art but they were delighted to accept the offer as they didn’t have a good picture of Sir Arthur.

“It’s wonderful to see it matched up with someone who will take care of it. One of the officers said it was a shame that Goring didn’t want it but I explained that it was about protecting it in the long term.”

Meanwhile, the trustees say bookings of the village hall have increased by about 18 per cent since the refurbishment was completed.

They redecorated the interior of the main hall and Bellême and garden rooms, installed new windows and blinds, wi-fi and energy-saving lights and restored and regilded the clock tower.

A new overhead projector will be installed over the summer and it’s hoped that the stage and storage areas will be renovated next year.