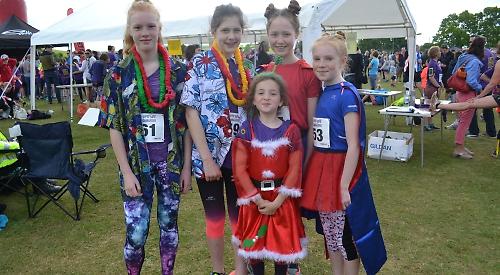 Runners aged five to 75 tackled a cross-country obstacle course which started and finished at Sheepcot Field, off Gatehampton Road, on Sunday.

Adults ran two laps of a 6km course or a single lap as part of a relay pair while jumping over hay bales and running through the “circle of doom”, a spiral loop marked out with stakes and hazard tape.

Smaller children took on a 1km course featuring cargo nets, hay bales and tractor tyres. Those aged five to seven ran one lap while those aged eight to 11 ran two.

The youngsters were led by 15-year-old Ben Adams, from Streatley, dressed as a panda. He then ran in Teenage Kicks while still in the costume.

Many other participants wore fancy dress, with costumes including Hawaiian shirts and garlands, Christmas elves and members of pop group Abba. The first man to finish the main race was Chris Lucas, from South Stoke, who has now won the event three years running.

Mr Lucas, a member of the Reading Roadrunners club who regularly enters the Goring and Woodcote 10km races, said: “I feel great to have won as Hairy Legs is becoming more popular so there was more competition than usual.

“It’s a really unique event because there are so many things going on, especially for the kids, which gives it a great atmosphere.”

The first woman home was Amber Gascoigne, from Reading.

The winner of the “old crumblies” section for the over-50s was Brian Kirsopp, also from Reading, who came sixth overall.

Lukas Haitzmann and Dominic Martin, who attend the Oratory School in Woodcote, won in different age categories in Teenage Kicks. Alex Harrington won the younger Little Legs category while Alex and William Darbishire, of Reading Road, Goring, came first and second in the older class. Their younger brother James was placed fourth in his age group.

Afterwards, a celebration with live music was held at the Catherine Wheel pub in Station Road.

Hairy Legs was launched as a cycling and running duathlon in 2002 but put on hold in 2013 and 2014 after Oxfordshire County Council withdrew its approval, which meant organisers couldn’t get public liability insurance.

It was relaunched in its current form in 2015.

Co-founder Phil Rose said: “We’re absolutely delighted with how it went this year.

“We had a record field in terms of the number of athletes and it’s particularly exciting that about half of them were 18 or under.

“There’s always a relaxed atmosphere and a real sense of community. People rock up with great big smiles on their faces and parents are proud to see their children take part.

“This is the first year that we’ve truly felt as though we’re back in business.

“We had built up a lot of goodwill and ‘brand loyalty’ over the years and I’d underestimated how long it would take to build that up again. Some of our regulars lost interest after the cycling element was dropped, which is fair enough, but we’re attracting more and more people who love it in its new form.

“The fact that kids can take part is a big selling point as there aren’t many children’s events in this part of the world.

“This year we had teams from Shiplake College and the Oratory taking part so the word has clearly spread and I can only see it becoming bigger and bigger.”

Proceeds from the event, which are yet to be counted, will go towards sporting facilities and projects at Goring and Streatley’s primary schools.