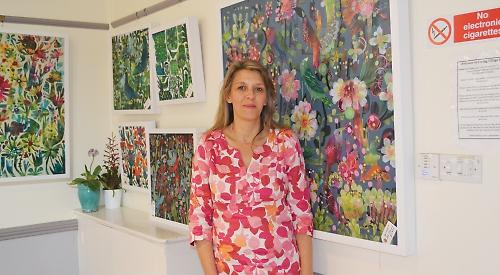 A GROUP of artists who used to exhibit at a gallery in Goring held a reunion at the village hall.

More than 500 people visited and the artists sold so much that they were able to donate £400 from their profits towards the ongoing restoration of the hall.

The artists used to be regular exhibitors at the Art@Goring gallery in High Street before it closed in 2015 and then became the Goring Grocer delicatessen. Mrs Pye, from Sonning Common, said: “It was a lovely gallery and we always got such a warm reception that we felt it would be a good idea to exhibit in Goring again while raising money for a good local cause.

“We had the most amazing response, which exceeded all our expectations. With only five artists taking part, good attendance wasn’t guaranteed but people were out and about enjoying the village.

“We all paint and create in different styles so it was interesting for visitors to see that diversity and actually watch us in action. Our sales were good and we hope the village hall trustees will be happy with the amount we raised. It’s lovely to be able to give something back to the community.”

The hall, which was built in 1900, has been redecorated and the roof has been repaired and the clock tower restored.

The trustees are now considering installing a projector and either renovating or replacing the stage.

A lecture on Cotswolds artist Ernest Gimson and his contemporaries in the arts and crafts movement will be given at a meeting of Goring’s Decorative and Fine Arts Society at the village hall on June 28 at 11am and 2.30pm.