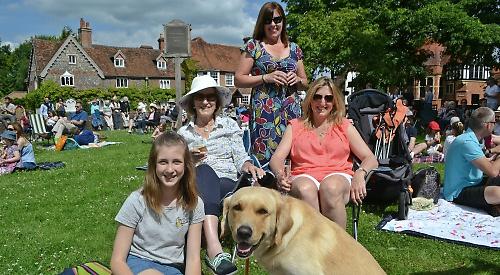 HUNDREDS of people attended a 40th anniversary performance by the Goring and Streatley Concert Band.

About 100 musicians from the group, which was formed in 1977 to celebrate the Queen’s silver jubilee, played on Rectory Garden as onlookers sunbathed and enjoyed picnics and ice cream.

The 90-minute recital featured pop music from the late Seventies, including a disco medley and Abba tunes.

The band also played works by Stravinsky, Thirties and Forties jazz and numbers from the musical Oklahoma!

The final tune was an arrangement of Happy by Pharrell Williams. The main concert band, conducted by Andrew McBurney, played for the first half before being joined by musicians from the group’s starter band, conducted by Claire Salmon.

Chairman Bob Edwards, who is the band’s percussionist, said: “It was magnificent. The weather was on our side and we were glad that so many people came out to support us.”

The brass and woodwind group was inspired by the Goring British Legion Brass Band, which was a popular fixture at local events in the Twenties and Thirties but folded at the outbreak of the Second World War. It was formed by musicians from the Roy Bailey Big Band, a separate group which is still going strong despite the death of its founder years ago.

The original members paid for their instruments with a donation from former Bomber Command leader Sir Arthur Harris, who lived in Goring.

It now plays at dozens of fixtures every year including the Women’s Institute afternoon teas at Goring lock, Greys village fete and at Phyllis Court Club during Henley Royal Regatta.

Mr Edwards, of Springhill Road, Goring, joined after his partner Gill Thomas told him the band needed a drummer. He said: “It is a great community organisation which I’ve thoroughly enjoyed being a member of.”