Scout leader honoured for more than 40 years of service 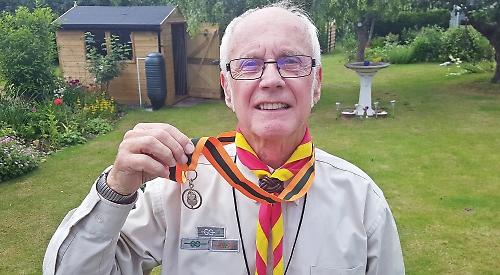 A MAN from Goring has been honoured for 41 years of service to scouting.

Peter Phillips, who lives in Wallingford Road with his wife Nicky, was presented with the Scouting Association’s Bar for the Silver Acorn at a special ceremony at Dorchester Abbey.

It is one of the organisation’s most prestigious honours, second only to the Silver Wolf Award.

Mr Phillips, 70, joined the 1st Goring Heath cubs as assistant leader in 1976 and became a warranted leader the following year.

He became Akela in 1983 and was awarded the association’s Medal of Merit in 1990. Two years later, he was appointed district commissioner for leader training. This was an administrative role in which he trained scout leaders across the Thames Valley to look after their young charges, organise activities and appoint assistants.

He then became commissioner for all the district’s cub groups and was responsible for arranging camps and tournaments in activities including six-a-side football, go-karting and chess.

He was awarded the Silver Acorn in 2006, which he collected at Windsor Castle, and was chosen as an Olympic torchbearer for the 2012 flame relay in honour of his service to the community.

Mr Phillips, a former engineering lecturer at Windsor and Maidenhead College, retired from all district duties in 2015 but has returned to his original job with the Goring Heath cubs and intends to stay for as long as he is able.

He said: “I love working with children at that particular age because they’re so enthusiastic and full of life. They’re an absolute joy.

“Despite all the electronic devices that are available, scouting is booming and I think it’s a wonderful opportunity to take part in activities that aren’t necessarily offered at school.

“This latest award came out of the blue and I was pretty speechless when I heard the news.

“I felt very proud as they said some very kind things during the ceremony.”