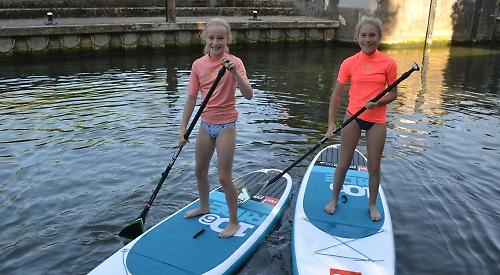 TWO girls helped raise more than £14,000 for a school in South Africa by paddling on boards along the Thames from Goring to Sonning.

Annie Akers, from Whitchurch Hill, and her friend Matilda Phelps, both 12, completed the 14-mile downstream journey in about nine hours.

The pair, who are pupils at St Andrew’s School in Pangbourne, undertook the challenge in aid of the Grace School in Siyabuswa, 110 miles north of Johannesburg, where they will be carrying out charity work this summer. They are part of a group of 12 pupils who will help to build a new classroom as well as teaching lessons, assisting in classes, looking after children and visiting their families.

All the children had to raise at least £1,000 towards the trip.

Matilda, who lives in Aston Tirrold, and Annie came up with the idea for their challenge as they have been keen paddlers for several years and each has their own board.

They set off from Goring Lock at about 9am on June 17 and arrived at the Adventure Dolphin Centre in Pangbourne, opposite Whitchurch Bridge, at midday. They stopped for lunch and were joined by a group of friends who accompanied them on the water on paddleboards or followed them along the towpath while walking their dogs and shouting encouragement.

The girls stopped for short breaks at Mapledurham and King’s Meadow in Reading before reaching Sonning lock at 5.45pm, where they were joined for dinner by their families and supporters.

Annie’s mother Katie said: “It went really well even though it was tough for them. They were lucky to have amazing weather and they completed a pretty incredible distance. They’ve enjoyed paddleboarding for a couple of years now. They spend a lot of time on the river and this was a chance to do something difficult yet enjoyable.

“It was harder than they expected because it takes a lot of effort to keep moving on those boards. I’ve done it myself and even 45 minutes is pretty tiring but they kept on going.

“I think it was a lovely thing for them to do and we’re all very proud of them.”

To sponsor the girls, visit my.give.net/grace2017