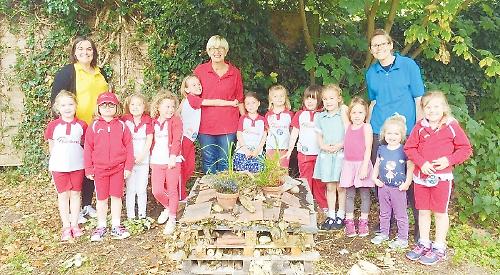 GORING’S Rainbows group has enjoyed a successful first term after being relaunched by three parents.

Donna Stone, Zoe Draycott and Sally Casbeard took charge of the group in April, eight months after it folded due to a shortage of volunteer leaders.

The group, which is part of the Girlguiding movement, now provides activities for 11 children aged five to seven and will be taking on six more in September. It meets at the Scout hut at Storton Lodge in Icknield Road every Wednesday afternoon during termtime. Youngsters who join can move up into the Brownies and eventually the Guides as they get older.

The revival was led by Mrs Stone, of Elvendon Road, who had put her middle daughter Evie, now six, on the waiting list some years before she was eligible to join.

However, she was told the group was being disbanded in September last year. In January she and Mrs Draycott, of Gatehampton Road, whose daughter Ruby, six, is also a member, expressed an interest in launching it again.

The pair underwent first aid training and security checks before getting permission to lead the group and are now sitting a formal leadership qualification.

Mrs Casbeard, also of Elvendon Road, then joined as a parent helper as her six-year-old daughter Rosie-Mae also wanted to take part.

The children have been taking part in arts and crafts workshops, learned to dance and built a “bug hotel” at Storton Lodge using twigs and leaves scavenged from the grounds.

This creates a safe habitat for a variety of insects as well as hedgehogs, which the children then observe and learn about. They have also built bird boxes with help from the Royal Society for the Protection of Birds.

On their final day of term last Wednesday, they took part in a “promise party” in which they pledged their allegiance to Girlguiding in front of the organisation’s district commissioner Andrea Bain. Their future plans include singing Christmas carols at one or more of the village’s care homes over the festive season.

Mrs Stone, an accounts administrator whose eldest daughter Ellie-Mae, nine, is a Brownie, said: “I was very keen to get it going again and I’m grateful to Zoe and Sally for their support.

“It’s been a bit of a learning curve but I think everything’s in place now. It’s a new and exciting venture for me though I do have some experience, what with having three children of my own.

“We’re all really enjoying it. It takes quite a bit of your time as it’s all voluntary but we’ve had some wonderful feedback from parents who say their children can’t wait to come back in September.

“It’s very encouraging to hear that and it makes all the effort worthwhile.”

For more information or to sign up, visit www.girlguiding.org.uk/get-involved